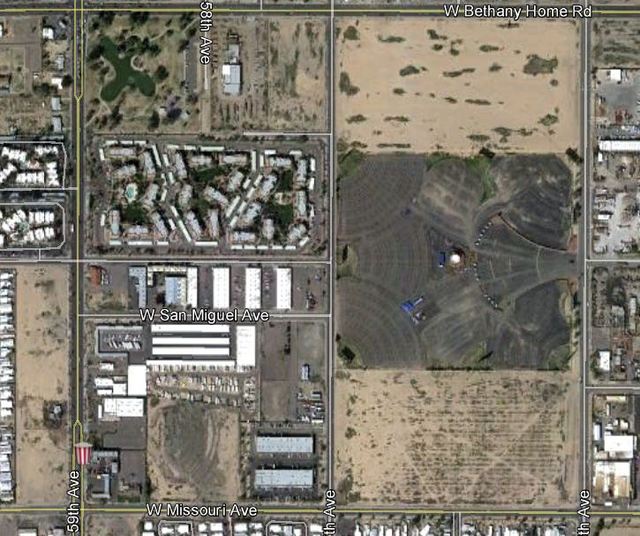 The Thunderbird Drive-In was a large single screen drive-in located just north of Camelback Road on 59th Avenue. It was opened December 21, 1961 with Jerry Lewis in “The Errand Boy” & Leslie Phillips in “Beware of Children” (aka “No Kidding”). It had closed by the late-1980’s.

This is one of my earliest memories of a drive in. One of the most memorable nights was seeing Butch Cassidy and the Sundance Kid. It was pouring rain but as it was opening night, no one wanted to leave. I think the last thing I ever saw there was Love At First Bite in 1979. As I recall their chili dogs were very good. Tasty Freeze was also just down the street and was a usual stop afterward.

Aerial photo at View link
You can also see the Glendale 9 DI on the upper right of the picture.

While in the U.S. Air Force and stationed at Luke AFB in Glendale, Arizona between 1966 and 1969, I worked for awhile part-time at this theater in it’s snack bar. It was enjoyable. The staff was great. We worked hard but had many laughs at night’s end. I became life-long friends with it’s manager of eighteen years whose name is Dick Ahlbrandt. Dick worked for his company for an entire career of nearly forty years and was especially fond of the Thunderbird.

After the Thunderbird, my friend opened a brand-new “four-plex” in Mesa for the company and finished his working life after opening a brand new super-plex for them there. The guy, to this day, is an avid industry observer. We speak almost daily about films. Neither one of us seem to be able to get “the movies” out of our blood.

Yeah, the Thunderbird Drive-in holds fond memories for many of us!

Goggle Earth 2011 One drive-in closes and another opens across the street.

I worked there in the 70’s as did my brother. Met my first true love who also worked there. Lost a friend who was murdered while working there. Dick & you too Steve, were great to work for. In a way, we were a family & it was not just a job. Some of the best years of my life were spent there & movie passes were a wonderful benefit. Was a real loss to us when it closed. No movie experience now can even come close.

Looking at the photo above, it looks like the Thunderbird Drive-in had 8 screens, not 1 screen!?

Hello everyone. I am writing a historic article on this drive in and a few others from around town. I am all ears if anyone could give me some info and tell me about their experiences while working there. Thank you and I appreciate your help!

A few more details from Boxoffice, Jan. 1, 1962: “This is the first outdoor theatre to be built from the ground up by (Fox West Coast Theatres). The theatre has a 114x55-foot screen, transitorized (sic) sound, illuminated speaker posts, and a children’s playground. … Two days before the formal opening, Fox held an open house offering a free screen program, free Pepsi-Cola, popcorn and pizza.”