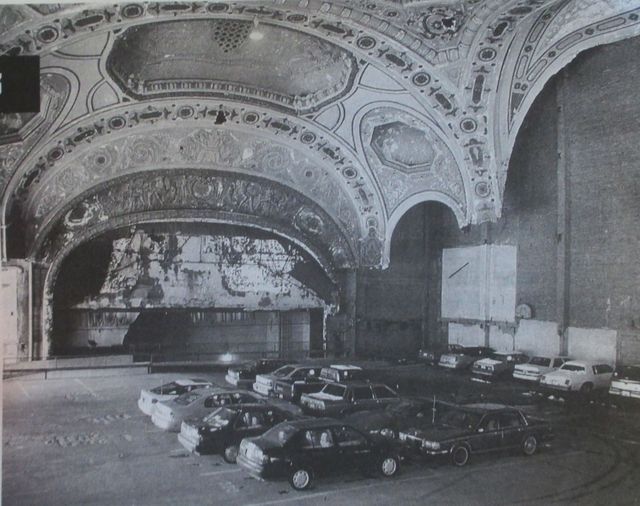 Built on the site of Henry Ford’s house. The Michigan Theatre was built for the Kunsky circuit in 1926 by Chicago-based firm Rapp & Rapp, in their traditional French Renaissance style, and sat over 4,000 in its cavernous auditorium.

It cost over $5 million and was extravagantly elegant. The Michigan’s four-story lobby was decorated with a set of huge chandeliers, towering columns painted to resemble multi-colored marble, and oil-paintings and sculpture from Europe. Its grand staircase swept up-wards to a mezzanine level complete with a sitting area with antique furniture and another staircase led to the balcony levels.

The auditorium featured a large orchestra pit, and a $50,000 Wurlitzer 5 manual 28 rank organ. Its stage was large enough to accommodate the most elaborate stage shows of the day.

In 1933, United Detroit Theaters acquired the Michigan Theatre from Paramount-Publix/Balaban & Katz, who had in turn, purchased it from Kunsky.

By the end of the 1930’s, both the live stage shows and the grand Wurlitzer organ were gone, and the theatre featured only movies.

In 1954, a wide screen was installed, damaging the proscenium arch’s ornate plasterwork. The first CinemaScope film screened at the Michigan Theatre was “The Command” starring Guy Madison.

The original multi-story vertical marquee on the Michigan Theatre was removed in 1952 and replaced with a much plainer standard marquee.

After declining attendance made the theatre unprofitable for United Detroit to keep operating during most of the 1960’s, they closed it on March 5, 1967.

Nicholas George reopened the theatre later the same year, but it struggled and was shuttered three years later.

In 1973, it was converted into a supper club named the Michigan Palace, but only lasted several months before going out of business. Renamed Michigan Theatre again, until 1976 it was used for rock concerts.

The theatre’s owners at the time decided to convert the magnificent palace into a three level parking garage. While portions of the lobby, upper balcony and the projection booth are somewhat intact, the auditorium was stripped down to its shell except for the ceiling and parts of the upper proscenium arch, which still hang on the garage’s upper floor looking like ancient Roman ruins.

The theatre can be seen in the movie “8 Mile” in the background as they rap before they enter the Chin Tiki, and is also featured in “Lose Yourself”, by Eminem as a stage backdrop.

The Michigan is prominently featured in the climatic fight scene in the recently released film “Alex Cross.” There are shots in the balcony area and above the ceiling. How authentic those are is questionable because damage is done to the ceiling at one point.

The MICHIGAN’s spectacular vertical sign was called the largest in Michigan, and was 120 feet tall by fourteen feet high and weighing seventeen tons.

By 1954, corrosion was found inside the 27-year-old sign which wasn’t noticeable outside. Sign contractor Edward A. Long of the Long Sign Company worked several eight-hour shifts from midnight until 8 am using a huge Moto-Crane to remove the sign, cutting it from the top down with torches. United Detroit Theatres said the sign wouldn’t be replaced.

I recently photographed the former Michigan Theatre. Check out the post at After the Final Curtain

http://www.cbsnews.com/8301-18563_162-57594651/wis-mans-basement-holds-ultimate-home-theater/ The original 5 manual Wurlitzer from the Michigan can be seen here in a basement decorated like a movie palace; working and playing!

Wow, that is REALLY cool!!!

Here’s the text of the report about Fred and his organ:

But if you make your way down the stairs, you’ll find a cellar unlike any other cellar. And it’s down here where 87-year-old retired insurance salesman Fred Hermes works on his hobby in front of a live audience.

“It makes me happy to see the enjoyment they get out of this,” Fred says.

Yes, here in the basement, where most of us keep our water heaters and paint cans, Fred has a giant Wurlitzer and balcony seating.

Fred built this theater-in-the-ground in 1959. It wasn’t so much that he wanted a theater as he needed a place to keep his organ and the 3,000 pipes that came with it. He rescued the organ from the old Michigan Theater in Detroit.

“Biggest organ that Wurlitzer ever made with five keyboards,” Fred says of the organ. It was made in March 1926, which Fred notes was the “same month I was born.”

Fred says he feels a kindred spirit with the organ.

That explains the Wurlitzer, but what about the rest of his place?

“Then they started tearing down all these beautiful movie theaters around the country,” he says. “And that’s when I thought, ‘Why not pick up some of this junk and make it look like a movie palace?’”

Which leads to the question: Why would anybody want that?

A few years ago, word got out that Fred had this theater and the tour buses have been stopping by ever since — which is fine by Fred. In fact, he says he has a responsibility to share his place.

“Here’s the way I look at life: this is a gift that God gave me,” he says. “And I think I owe something. And that is why I have people coming around here.”

They say God works in mysterious ways. And if this is one of those ways, Lord knows what he’s trying to tell us. Maybe follow your dreams, or share your passion, or maybe we’re just supposed to appreciate the quirks of this great country.

If you want more information or would like to visit Fred’s basement organ, go to RealRacine.com.

The film referenced was “Strategic Air Command,” filmed in VistaVision. I specifically went to the Michigan Theater to see it, thinking that projected VistaVision films were of a wider aspect ratio such as CinemaScope films. I was wrong about that, but the depth of field was unbeatable except by the Cinerama films.