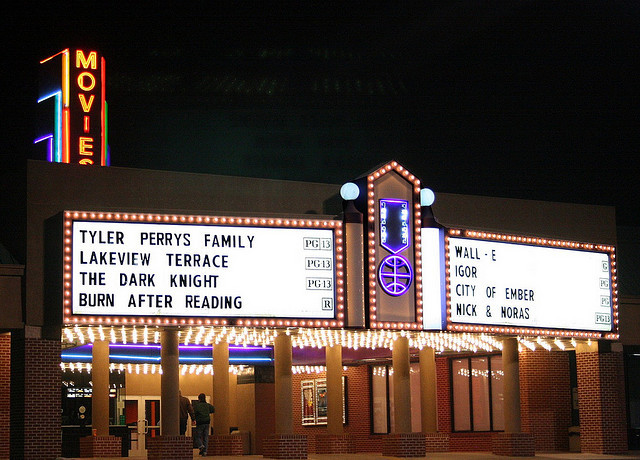 The Movies 8 theatre showed recent movies in their second run and was very crowded on Friday evenings. Each screen is wheelchair accessible, and they are THX certified. Starplex Cinemas operated the theatre with a drastically discounted tickets policy. It was taken over by an independent operator and renamed Movies Plus. It was closed around September 2018.

The Tallahassee Movies 8 was opened by Cinemark, circa 1989. In 2004, the theatre was sold to Starplex Cinemas.

Starplex sold the Tallahassee Movies 8 to Cinema Holdings Group of New York, NY in May of 2010. The last day operated under Starplex Cinemas was 5/6/10.

here is the wesite of Cinema Holdings Group
http://www.cinemaholdings.com/

Cinema Holdings must had sold it. It is not on their website, but showtimes are still posted.

This opened on August 11th, 1989. Grand opening ad in the photo section.

Movies 8 masquerading as “Movies Plus” at the time of its demise, closed circa September 2018 The final program was: Jurassic World Slenderman EQ2 Hotel Transylvania 3 Alpha

The theatre was a modest performer under Starplex, with concession sales suffering from a senior citizen heavy customer base. Thus, when Cinema Holdings approached the company about purchasing the theatre, Starplex readily agreed to sell.

Cinema Holdings struggled with the theatre from day one and caused a few headaches for Starplex, as the new operator failed to fully establish new branding and their mismanagement regularly connected back to Starplex (mistakenly so). In less than a year Cinema Holdings had dropped the proverbial ball so badly that they were forced to sell. A nearby church purchased the theatre and continued operations, under new management, but I am unsure if they were still involved during the venue’s final years.

For many years this venue’s most memorable feature was the showtime phone message, which showcased a very animated greeting, voiced by the theatre’s longtime general manager, Hal.

I miss Hal. He was a great guy and we became friends. I would go in there in the mid-afternoons after I got off work and he and I would talk pinball if he had a few minutes. I would play for hours. Then I would watch movies. I moved to Massachusetts in 2012. I moved back to Florida in 2021 and was more than disappointed to find the theatre closed. Hal used to mention some of his frustrations with his bosses of the theatre.

The above comment from Idashahbazali on July 28, 2022, appears to be a scam.