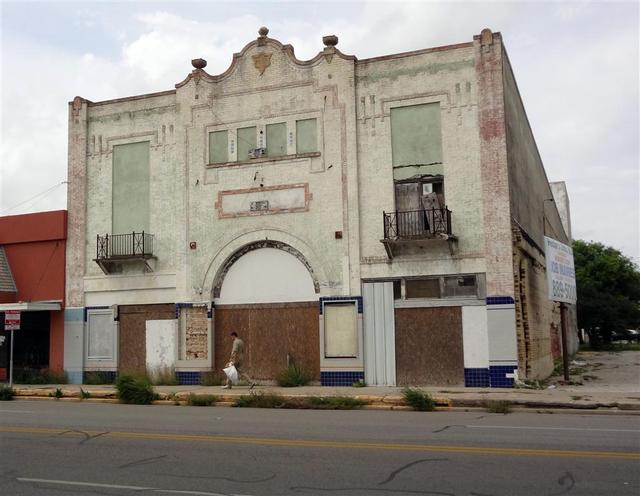 Hard to figure how a municipality could be called “Body of Christ”. Doesn’t that seem like a church/state separation issue?

Numerous web sites say that the Melba Theatre was built in the 1930s, but an article by Kenneth L. Anthony says that it was built by Edward and Simon Grossman in 1927. I don’t have access to the article, but it is on one of those web sites that allows access to the holders of cards from some public and institutional libraries, so perhaps someone else can read it. Here is the link.

The Melba was already looking a bit dowdy when this photo was taken in August, 1937.

The Melba was directly across the street from another theater, the Grande, built by Bruce Collins in 1928, and by the 1930s both houses were being operated by the Robb & Rowley chain. Neither was first run. The Grande eventually got an Art Moderne facade, while the Melba retained its Spanish Colonial front throughout its history.

The title of Anthony’s article, Moving Pictures and Migrant Pickers: The Melba Theatre and Spanish Language Movies in Corpus Christi, Texas, 1927-1966 suggests that the Melba operated longer than the Grande, which was converted into retail space for a furniture store in 1961. Judging from satellite view, the Melba is in rough shape, as its roof looks very sketchy. The Grande’s roof looks to be in better shape, as its building was used for retail space until fairly recently.

The most likely opening date of the Melba Theatre is November 31, 1927, as the following day the Corpus Christi Times published an article about the event. I can’t find the article itself on the Internet, but it was cited in a paper about the proposed Leopard Street Historic District.

I was homeless in Corpus Christi Tx around 2004-2005. There was a entrance in the back covered with sheet metal. This building may have saved my life. (it got really cold a few times) The floor in the theater room is almost non existent, had to lay boards down to cross the room. there are a few offices and a projection room upstairs, the roof in one room caved in years ago. It was an awesome place for me and my friends to sleep, away from the crackheads that frequent the shelters.

The building was torn down and the lot cleared this summer. It’s all gone including the building across the street from it.

photos of the building by the local paper before destruction in the 2nd week of Aug 2014.