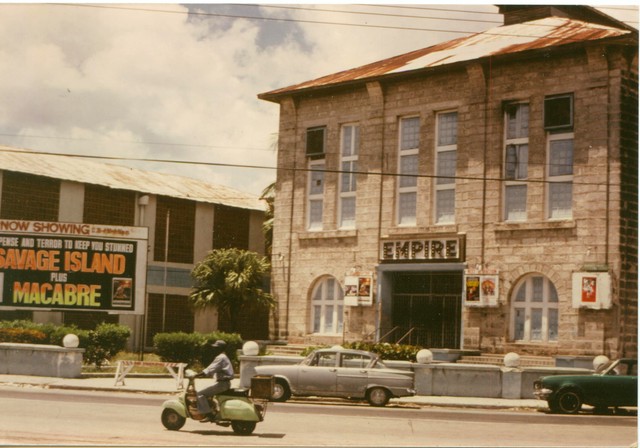 The Empire Theatre opened in 1922 as a live theatre and first run motion picture theatre. In the mid-1940’s, it was owned by the British Colonial Film Exchange, Ltd.

It has been closed since around 1975 and has slowly become derelict, but plans in 2003 had been submitted to restore and renovate the theatre into a home for the national company for performing arts.

Recent pictures of the Empire theatre are at this site..

An article on the theatre is also here..

Here is another photo:
http://tinyurl.com/lhy658

On July 21st, 2015 I sat in the gallery observing a meeting of the Parliament of Barbados. At one point while they were debating the manner in which the history of the country should be presented, a member said the Empire Theatre should be preserved considering its role in the Uprising of 1937.

I Googled and found this article from 2012 saying the Empire was the first place attacked and should therefore be a museum for the riots:

(Wish I knew how to hyperlink.)