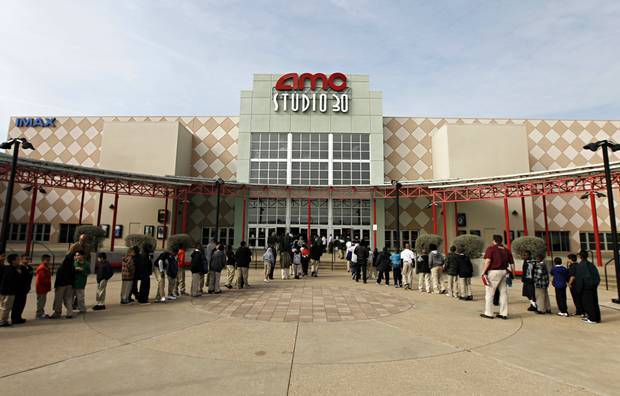 It is. It opened as AMC Mesquite 30 in March, 1998. The Film-Tech website got the name wrong. It has the same design as the AMC Studio 30 in Houston.
Quote: “The most recent AMC Godzillaplex in town”

This is the 5th largest cinema by # of seats on Cinema Treasures.

AMC built its first Mesquite multiplex in 1985 with its Towne Crossing 8. It was competing with nearby multiplexes by United Artists and two by General Cinema Corporation (GCC). With newer megaplexes coming into style, the circuits noticed a “migration” away from the aging Town East area multiplexes in 1995/6. In 1996, AMC announced a bombshell which would forever change moviegoing in the area and it was the AMC Mesquite 30.

The 6,360-seat AMC Mesquite 30 would be built on a 33-acre site at the confluence of Interstate 635 and U.S. Highway 80. Unlike many projects prior, AMC would own the land instead of leasing to give the project a bit more permanance than, say, its 24-screen Grand that it would open and then abandon upon the end of its 15-year lease. The 131,000-square-foot theater was one of three 30-screen behomeths along with Houston and L.A. and would soon be joined by a project in Grapevine. Plans for a stand-alone 30-screen Frisco theater were scrapped and later became the 24-screen AMC Stonebriar Mall.

The Mesquite AMC theater would be one exit removed from the Mesquite Championship Rodeo which was receiving a hotel and conference center while a country-western themed nightclub was being built. Befitting of the area, the AMC Mesquite 30 was designed with country western themes. Rest rooms had a rustic old west vibe and the northern concession stand was in the old west general store corridor while the other two were tropical rain forest and computer-centric concepts. A large circular courtyard was built around 18 ticket stands, almost unusable on the many hot days in Mesquite. Initial capacity for the auditroia ranged from 118 to 603 patrons. The project was delayed about eight months and actually opened more than three months after the Grapevine project which had opened in December of 1997. As a result, Mesquite employees were sent to train in the very similar Grapevine Mills 30.

Parking and security issues plagued the AMC Grand and the Mesquite had a different concept. Two golf carts and later Segways used by security guards would monitor the 6,000 car parking lot. And the most distant parking lot could be closed off on less busy weekdays. Launching on March 20, 1998, the impact of the mega-successful Mesquite 30 on the multiplexes just two exits away on I-635 was catastrophic. None would survive past the calendar year as AMC would shutter its own Towne Crossing 8, followed by the GCC Town East 6, the UA Town East 6, and the GCC Town East 5. In January of 1999, Cinemark would shutter its nearby dollar house leaving AMC as the only first-run circuit in the area. It was a competitive coup de grâce.

Even without serious competition, in June of 2009, the theater got its first major retrofit as it would retrofit its largest screen desginated as an IMAX experience auditroium. While these screens were derided by many as “faux Max” screens, they added branding and additional revenue to the location. But an even more grand retrofit occurred in 2013/2014 with AMC — now under Dalian Wanda Group — placed a lot of capital in refreshing theaters nationwide.

Went here for the first time on 1/5/19 and saw a film in the Dolby Cinema room. The screen is one of the largest for a Dolby out of all the AMC DFW locations. Sound and picture are great but the bass transponders built into the seats didn’t function with the same impact as other Dolby auditoriums. IMAX room looked decent for a LieMax. All in all, a pretty decent theatre.