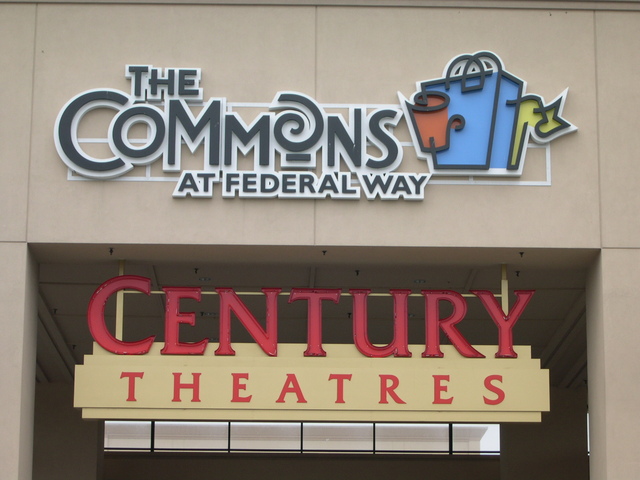 Just drove by. It’s not open yet. Walls are up, but interior still needs to be completed. No opening date announced.

Been in the planning stages for years. I remember an opening date of “fall 2004” at one point. This time they actually broke ground, so it will probably open this fall.

The Century 16 (operated by Cinemark) opened on July 3, 2007. It is located in The Commons of Federal Way (formally the SeaTac Mall). The site was originally a Lamonts/Gottschalks department store that was demolished to make way for the theater. The seating capacity is approx 3400 seats. The 16 auditoriums range from 108 to 434 seats. All theaters have several flat rows in front and stadium risers in the back and have an orange and black color scheme. The box office is located outside the theater in the mall itself. There is a large, high-ceiling lobby area with tables and chairs. The snack bar is the classic Century Theaters design with cafeteria style service where you gather all your goodies and pay a cashier at the end. The opening day movies were: Transformers, Knocked Up, Licence to Wed, Ratatouille, Live Free or Die Hard, Oceans 13, Evan Almighty, Pirates of the Caribbean: At Worlds End and Sicko.

I wish I could say some nice things about this theater, but when I was there about a week after it opened, the print of Live Free or Die Hard was already heavily scratched throughout. Also, the auditorium lighting was not dimmed enough during the screening, thus casting extra light onto the screen. Seating wasn’t very comfortable either.

On the other hand, the popcorn was quite good!

Here is a July 2007 press release from Cinemark:
http://tinyurl.com/5sbrew

Advertised as the “Century Federal Way”. Also the address in the advertisement is 2001 S. Commons.

Advertised in the Seattle Post-Intelligencer.

One auditorium was converted to a ‘Cinemark XD’ auditorium in October 2015, and all auditoriums throughout the complex are currently being converted to Luxury Loungers with reserved seating.