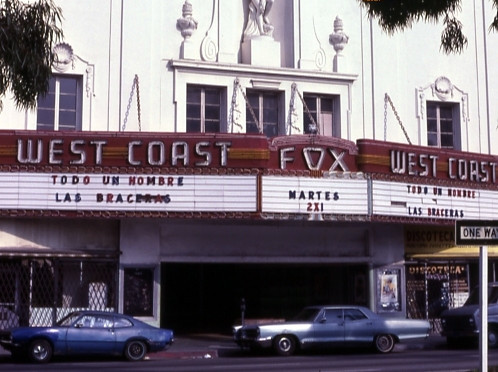 The West Coast Theatres chain opened their 2,300-seat West Coast Theatre on June 6, 1925 with Richard Barthelmess in “Soul Fire”. It also featured on stage a Fanchon & Marco revue “Idea of Sally”. It was situated next to the Fox Imperial Theatre. It was equipped with a Wurlitzer 4 manual 26 rank organ, which was later installed in the Old Town Music Hall, El Segunda. although the console they use is from the Metropolitan/Paramount Theatre in downtown Los Angeles.

Closed as a regular movie theatre by Mann Theatres in 1974. It was then used a a rock music venue, a church and a Spanish language movie theatre. It was finally closed on 9th & 10th November 1985, when this Fox theatre had a large going away parties. The last film to play this theatre at those parties was James Cagney in “Footlight Parade”. It was demolished in 1987 and a hotel was built on the site.

The West Coast can be seen in this 1968 photo from the Long Beach Library:
http://tinyurl.com/26rpeas

Nice photo too bad the bus is in the way.

There’s a “Fox West Coast” roof sign on the right of this photo:
View link

Now to figure out what the theatre in the foreground is…

It is the United Artists Long Beach Theater /theaters/2032/, a lovely art deco theater that was torn down probably in the early 1980s. There’s a picture here: View link

Here’s a couple of hand bills from the rock concert era:

The Long Beach United Artists was demolished sometime between Spring, 1981 and Summer, 1982. I remember seeing it still standing and operating in ‘81, but I had no camera with me. When I returned to take photos of Long Beach theatres in mid-Summer, 1982, it was gone. The Roxy, State, Palace, Imperial, and Fox West Coast were still there, and I shot them except the State, which I happened not to notice, I believe, because the marquee was gone, and I didn’t remember it from my early childhood.

Circa 1953 photo added, courtesy of the AmeriCar The Beautiful Facebook page.

I was there for a concert in 1972, it was Its A Beautiful Day as the headliner. Elvin Bishop was second billing, that’s when he had Jo Baker as vocalist. The opening act I never ever forget and to this day I cannot find anything on them, it was a band from frisco I think called ‘Grandma’ Its was just a bass player who played leads on his bass and a drummer who was this small guy with a mountain of drums all over his drum kit and he could play them all. He did his drum solo and played the wooden floor also, the theatre was such a beautiful place and the acoustics were awesome. Great historic things are always gone for the reason that they are old. Nothing is sacred any longer and its all about money money money.. Too Bad..