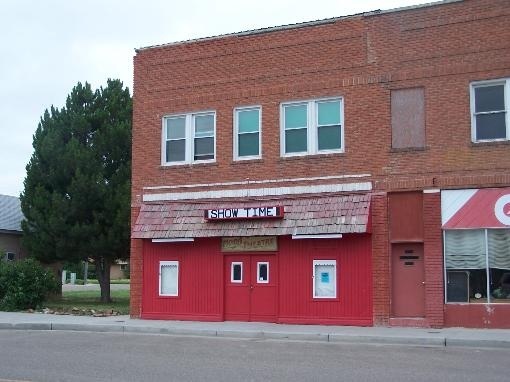 The Moon Theater in Stratton was constructed and opened in 1921. The theater seats a little over 200 people. It is currently owned by Doreen and Melvin Koons who purchased it in 1977 and closed it in 1994 due to lack of attendance and health issues.

It is still clean, in good repair and perfectly intact with concession equipment, seats and screen. The theater could be re-opened immediatly with the instalation of new projection equipment. The two carbon arc Ballantyne projectors were removed in the late 1990s by Mr. Koons who donated them to the city. One is now on display at the town hall and the other in the library in town. The Koons' still live in the housing quarters above the theater.

The theater was and is well loved and the Koons' made many improvements and updates. Several of the seats were reupholstered in the late 1970s. This theater is quite amazing to see.

The Moon as it appeared in 1996, a couple of years post-closure – I wonder if the interior has been kept up?
View link

Here is an update on the old Moon for those who may be interested. Mrs. Koons, has let us rent the theater, so far we have cleaned 15 years of dirt out of it and every light in it is working. We even have the little water fountain working in the concessions area. We have done two live music performances so far, what an honor to be able to be back in the theater of my childhood. The theater is as described in the first posting. It is a living time capsule. The boy scouts sold pop and used the popcorn machine at the last show, made it almost seem complete. The next time we do a performance I can post it if anyone would be interested in coming. We have also been talking about doing a movie club; wow is it expensive to show a DVD. I priced through Criterion and Swank. Any ideas would be greatly appreciated!

For those of us in the vicinity of eastern Colorado – like me – please post any upcoming events! It would be a treat to see your work and take in a show.

I had a friend whose car broke down in a small Colorado town and while waiting for the repairs he finds out who in town owns the old movie house and he Finds guy that owned the old theatre, gave Charles a tour inside. I can’t believe he did not take his camera.Wonder where that old Colorado Movie house was at?

Sometimes you don’t have to sneak in exit doors. Charles is a cop, but was a theatre manager at National Hills along with the rest of the assistants.

Anyone interested we will be opening the theater for a showing of “American Graffiti” to coincide with a car show in the community. The show date will be August 21, times 2:00pm and 7:30pm. Come out and see the theater, we have it looking like it did the day it closed!