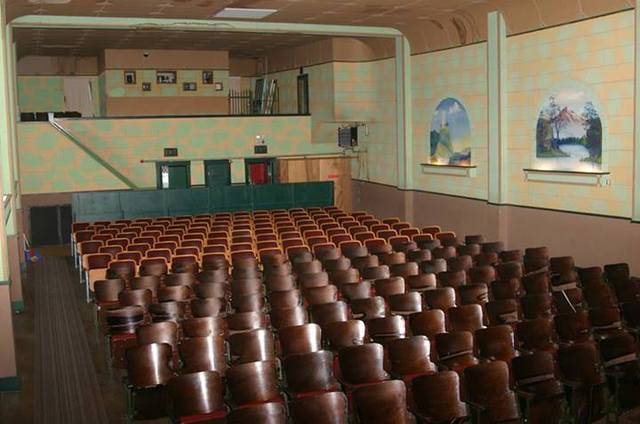 The town of Flagler is perhaps one of the smallest towns in the US that still hosts an operating theatre at a population of over 600. The theatre was constructed and opened in 1930 as the Grand Thetare. Half of the building is the theatre, and the other is a clothing store which is owned and operated by the same lady who has the theatre.

The theatre is a well preserved time capsule, to put it mildly. Mrs. Arthena Witt, the owner, pointed out that the only alterations the theatre has received in its 77 years of existence are carpeting, a concession stand and a partition enclosing the restroom doors from the theatre, all added in the 1960’s.

The seats are mostly wooden with a few that are upholstered and the projection booth is completely original with Century projectors and carbon arc lamphouses running 2000' reels. It was converted to digital projection in June 2014. There are beautiful Art Deco style murals on the walls depicting nature scenes while the rest of the theatre is covered in beautiful 1930’s era panelling.

It was purchased by the Witt family in 1974 and Mrs. Witt’s daughter is the projectionist with Mrs. Witt and other family members taking care of the management and other operations.

This theatre only operates June through September and is mostly kept open to entertain the youth and other residents of this small, isolated farming community. This is an amazing theatre and I would encourage anyone to visit. I hope to attend a movie there this summer.

Theater has a balcony that sits in the front and to the sides of the projection booth.

No movie posters in front of the theatre by the time the Googlemobile passed it by. Looks closed.

The 1949 Film Daily Year Book listed only the Grand (225 seats) under Flagler, so this is probably about the same theater.

Boxoffice, July 22, 1950: “FLAGLER, COLO. – The marquee of the Grand Theatre here has been improved by the addition of new neon tubing and lettering. Other improvements planned by Mrs. Nora Wright, owner and operator of the theatre, include new air conditioning and new seating.”

Boxoffice, June 19, 1967: “Jim Trabern plans to reopen the Flagler Theatre at Flagler about July 1. The theatre has been closed several years.”