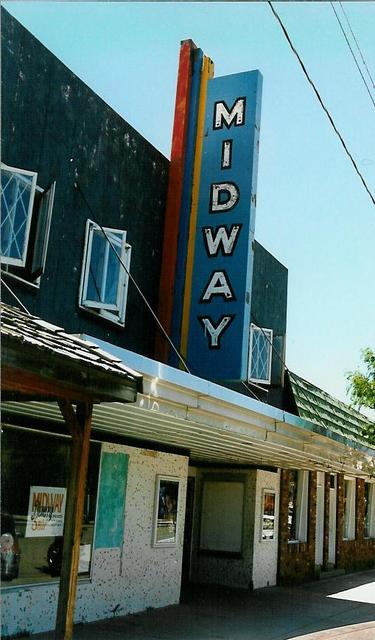 The Midway Theater in Burlington, Colorado was constructed in 1916. It is a beautiful, retro theater with a 1970’s era lobby and concession stand and a 1950’s era auditorium. It is owned by Mr. Darold Albertson who purchased it in around 1990, after working in the theater for several years and the Burlington Drive-In outside of town.

It has a small balcony that flanks the projection booth but is no longer used. The projection booth was converted from Brenkert Projectors running 2000' reels to platters and a Monee Projector and Xenon Lamphouse in around 1998. The theater still packs in a good crowd.

I attended a screening of “Blades of Glory” on April 21st, 2007 and the family who runs it is quite friendly and the presentation is very good. Showtime was at 8pm and tickets were $5.00 for adults. The Midway Theater was closed in 2013. It had reopened by 2017.

Looks closed online, all the showtimes list no showtimes available.

CHECK OUT THE 2 PICS OF THEATRE CALENDARS I PUT ON, MY EMAIL ADDRESS IS

I spoke with Darold Albertson, the Midway’s current owner, the other day and he confirmed the theatre closed around 2013 due mainly to lack of funds to make the digital conversion as well as some attendance issues. The theatre is, however, for sale and he believe he will be finalizing the sale to a group that formed to reopen the theatre for live events and/or movies. Prior to that the theatre has been running regularly; as with most businesses, organizations and even local government agencies in that part of the state, the Midway never had any web presence. No website,social media pages, online movie times or even a showtime recording on the phone which is why it “looked closed”.

So sadly, for now, status should be changed to CLOSED although we’ll have to keep an eye on it and change it again once the group gets it running once again!

This link highlights a fundraising effort to purchase a digital projector, repair and reopen the Midway. The article says the Midway was built in 1916, and will be celebrating it’s 100th anniversary. So maybe the 1923 date should be changed in the Overview. Copy & paste to view.

Here is the Go Fund Me page for the Midway. It has several vintage photos of the original facade. Which I’m sure still exists behind the newer one. Copy & paste to view.

I added the vintage and current photos to the Photo Sections crediting Danyel Brenner. So they don’t disappear after the Go Fund Me page expires.

I was driving west on Interstate 70 by the Kansas-Colorado border today (February 23, 2016) when I spied the upright blade sign for Burlington, Colorado’s Midway Theater heading east on the back of a truck. The multi-colored marquee is on its way for further restoration, and the renovation of the theater is fully underway. New pictures in the photo section, and the Midway’s facebook page is here: https://www.facebook.com/Midway-Theater-869556759754221/?fref=nf

I can confirm that this theatre is OPEN!

The Midway was built in 1916, and still needs to be changed in the Overview. The link I posted in 2015 is still up, and it confirms that year and that they wanted to reopen by their 100th anniversary.

Here is the link again.