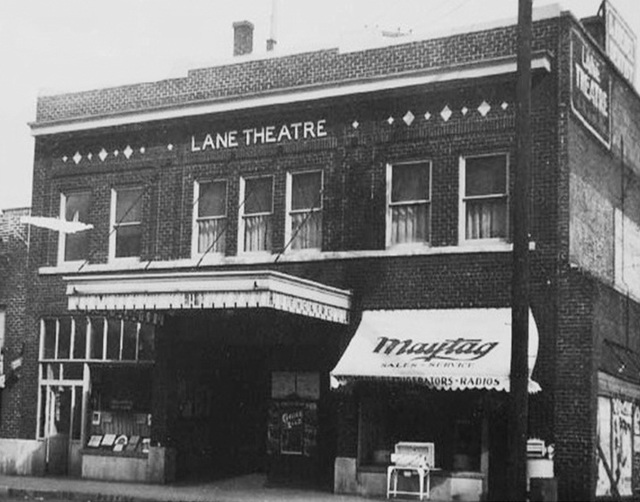 Built in 1923 as a vaudeville theatre and movie house, this beautiful theatre was closed after exclusive use as a movie theatre in the early-1970’s. It has sat vacant and is a remarkable time capsule in need of major renovation.

In 2008, plans were being formatted to renovate and restore the Vogue Theatre as a Community Arts Centre.

Was recently purchased by someone in Cle Elum who wants to restore it – we’ll see, it’s in rough shape. There is no usable equipment left inside, even the seats are wood with no upholstery. Major crack in a roof beam or truss due to heavy snows in 1996-1977. Restrooms are gone, they were converted to small storefronts that are rented out. There is a 800 sq ft apartment upstairs behind the projection room. Originally had 112 seats in the balcony, and about 500 on the main floor. Has a legitimate stage and orchestra pit, but very small, and no dressing room – maybe a dressing closet. Was noted for having an “oval” layout in the auditorium. Will post a photo or two when that feature is back up and running. The latest buyer seems to have more drive to get it done that the last few, but it will be a big challenge.

The Vogue Theatre at 210 Pennsylvania Avenue in Cle Elum, Washington is on its way to a new life.
History:
1909 – The Rose Theatre is built by James Lane; admission is ten cents to enjoy vaudeville performances and silent movies.
1918 – The Rose Theatre comes to a fiery end after a blaze erupts in debris near the building, causing the famous fire that destroyed most of Cle Elum.
1923 – The Lane Theatre is built on the same location. Constructed of brick, with a seating capacity of 780, it is heralded as the last word in comfort, convenience, and safety.
1929 – Talking pictures, or “Vibraphone” and “Movie Tone,” are installed at a cost of $10,000. Cle Elum’s first 100% talking picture debut is “Wolf of Wall Street."
1938 – The Lane is purchased and remodeled by Harry Ulsh, becoming the first theater in the Northwest to feature fluorescent and neon lighting. The theater’s name is changed to "Vogue,” reflecting its ultra-modern features.
1947 – Fred Estelman purchases the Vogue and installs the latest in sound equipment.
1954 – “Cinemascope” is installed, adding depth and width to the films.
Late 60s to mid-70s – Coal mines close, population declines, economy plummets. The Vogue closes and essentially sits empty for the better part of thirty years.

Current Events:
2007 – Larry and Rosemary Putnam purchase the Vogue and begin the process of putting together a new 501 ©(3) non-profit organization dedicated to renovating the grand old theatre.
2008 – Board of directors in place, non-profit status obtained, the Vogue Theatre Associates (VTA) are now getting the paperwork in order to transfer ownership of the building from the Putnams to the VTA. Ward Design Group of Seattle is working on the renovation designs with art deco elements and state-of-the-art equipment.

The Future:
The Vogue Theatre will serve the Upper Kittitas Valley and the Central Washington region and provide myriad opportunities for community members, both young and old, to enjoy and to learn from theatre and the performing arts.

Not much of a movie theatre.

I recently did a walk-through and the interior has been gutted and ready for restoration.

The Vogue Theatre is sort of open. There doesn’t appear to be any web site for the theater yet, and I can’t find any events scheduled, but this article published in the local Daily Record on November 6, 2010, announced that the reopening of the house would take place on November 13. There’s an interior photo. The space looks pretty raw, as the complete renovation has been put on hold until the economy improves.

Another item in the Daily Record announced a December 4 appearance at the Vogue of the regionally popular country music group, the Dave Rawlinson Band. YouTube has a couple of videos from that performance. As far as I can find, there have been no events at the Vogue since then.

There were a few events this summer at the Vogue, including chamber music and opera arias. I did not attend, but a friend said the theatre was pleasant and promising, and that renovation was still underway.

The restored venue, a performing arts center, now has a website at voguetheatrelive(dot)com. The Facebook page for the theater was last updated in late June 2012, but they may be in a down period since it is winter.

Status should be closed. Facebook page indicates this and no activity on web.

Was in Cle Elum in June, 2016 and the theatre appeared to be in relatively good shape from the exterior but was unable to get a peek inside. Still closed and no indication that it has been in use of late.