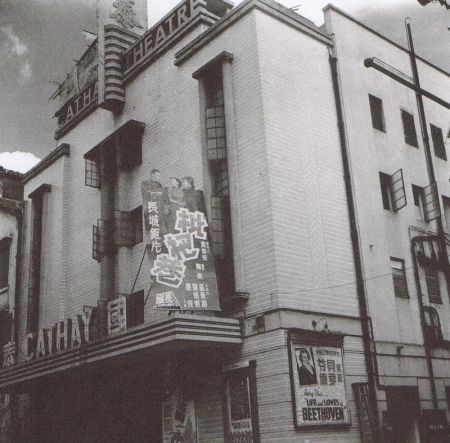 The Cathay Theatre was situated in the Wanchai district near the Oriental Theatre on the Hong Kong Island.

It opened to business on 14th February, 1939 with first-run “Battle of Broadway”. Before WWII, it showed second-run English language films. Selected Chinese dialect films were shown in special 12.30pm show.
During the war years, it showed films censored by the Japanese Army. After the suspension of electricity supply on 20th August, 1944, the theatre closed temporarily.

It re-opened after WWII, and showed selected English language and first-run Chinese dialect films until its closure on 1st November, 1984, and it was immediately demolished.

The Cathay Theatre ABC with three mini-cinemas was built on the site of the theatre, and it was closed in mid-1997.

Chinese name:國泰戲院。The auditorium is on the ground floor of the theatre building.