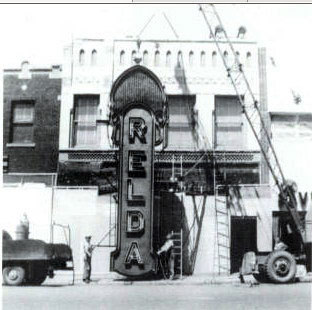 On June 29, 1929 the Trio Theater was closed to be remodeled and it reopened November 27, 1929, renamed, the new name Relda was Adler spelled backwards.

There are some misspellings in the description. The owner of the Adler Theater Co. was J.P. Adler, not Alder. Other Marshfield theaters in the chain in 1948 were the Adler and New Adler, which I presume were separate theaters.

The Trio Theatre opened in 1916, according to the September 30 issue of The Moving Picture World that year, though the magazine mistakenly called the theater the Triot. According to a blog post by a former patron of the Adler Theatre, the original owners of the Trio, Kliner, Lang & Scharmann, had operated a hardware business in the building before converting it into a theater. The Trio Theatre can be seen (just barely) in this photo from the Wisconsin Historical Society.

As near as I can tell, the Trio Theatre building has been demolished and replaced by either part of a J. C. Penney store (now sporting the name Penny Court on the facade) or part of the adjacent building housing an enterprise called High Street Salon, Spa, and Travel.

Here is a slightly better view of the Trio Theatre, though its still partly hidden by the Blodgett Hotel’s entrance portico.

From the 1940s a postcard view of Central Avenue along with the Relda Theater.

Betty Adler, daughter of J.P. Adler told me that he ran a contest to rename the Trio Theater as he renovated it. A magician appearing at the Opera house entered Relda – Adler spelled backwards. He won. The Relda was the first theater in Marshfield to be converted to wide screen format, it was premiered by the “The Robe” the first CinemaScope feature released The building that housed the theater and subsequent businesses was destroyed by fire a few years ago