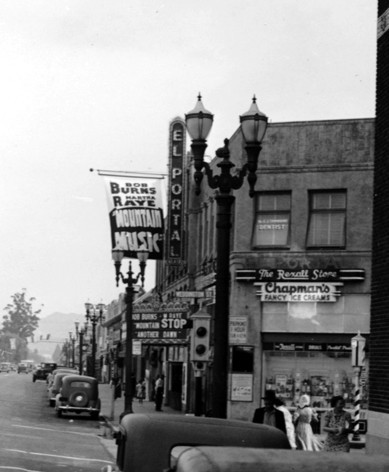 The El Portal Theatre was opened by West Coast Theatres on October 5, 1926 with Ralph Graves in “Blarney”. Supporting the MGM produced feature film were a live performance by Chinese actors and actresses and a Chinese jazz orchestra.

It was the final theatre to be designed by prolific theatre architect Lewis Arthur Smith. Seating was provided for 1,346 on a single floor and the decorative style was Spanish Renaissance Revival. Movies, supported by a vaudeville show ran here for several years, until the arrival of talkies.

The El Portal Theatre became a major second release theatre on the Fox West Coast Theatres circuit in the area. In 1950 it was given the ‘Skouras’ treatment and the auditorium’s original decorations were totally obliterated with drapes and curtain material. It was reopened on December 22, 1950. Later taken over by National General and then Mann Theatres. It was taken over by Metropolitan Theatres chain on May 7, 1978 screening Spanish language movies.

The single screen El Portal Theatre was badly damaged in the 1994 Northridge earthquake, when the entire ceiling fell in and side walls cracked. However, it was purchased by the Actors Alley stage company in 1996, and they set about securing the building and creating working theatre spaces within the existing walls. Little remains of the former interior, as this had mostly been destroyed. The facade, marquee and paybox have been retained. It reopened as the El Portal Center for the Arts on January 12, 2000, with a 360 seat Main stage theatre and a 95 seat Forum theatre, presenting modern popular plays. A 42 seat Studio theatre was added recently.

The building is designated a Historic Cultural Landmark.

A good portion of the crime thriller “Hard” (1998) seemed to be set in this theater; the killer used it as his lair and had victims on the stage, in the dressing rooms, etc. The place was nearly gutted at the time, with scaffolding inside. They didn’t show the outside, but they showed the proscenium, exits, asbestos curtain, and other interior details. Near the end of the movie, with the police closing in, one of the cops radios in that they’re at the El Portal on Lankershim, so of course I came to CT and looked it up. Voila!

The R-rated movie, which is about a closeted cop on the trail of this killer, is graphic in its sex and violence, and is currently running on the cable channel Here and is available on Netflix. Buyer beware.

I grew up in North Hollywood during the 50’s. The El Portal was my neighborhood theater. I used to love going there on Saturdays. I miss those days so much. Next to it, on the corner was a diner called Albert Sheetz but it closed. On the other side was a department store called Rathbuns. My parents knew the owners. Nearby was the place where my mom and I used to catch the “red car” into downtown LA. It was really an adventure for me

I remember the El Portal from the 50’s and 60’s. It was my Mom’s favorite theatre. Among many others, we kids saw a rerelease of Disney’s Fantasia and we all went to a rerelease of Bambi on my birthday. North Hollywood was a favorite place to go. There was an old wood-floor Woolworth’s right across the street where I’d always order a grilled cheese sandwich and a chocolate malt.

Neither is dated, but from the nearly-pristine condition of the theater I’d say they were probably taken around the time it opened.

The El Portal Theatre in Los Angeles, California was recently featured in Episode 20, Season 2 of the Lethal Weapon TV show. The episode was entitled “Jesse’s Girl.” Roger Murtaugh’s daughter Riana was watching a movie with her new boyfriend inside the theater. They also showed the marquee outside. According to the theater’s website, they no longer show movies there. It’s all live shows now.