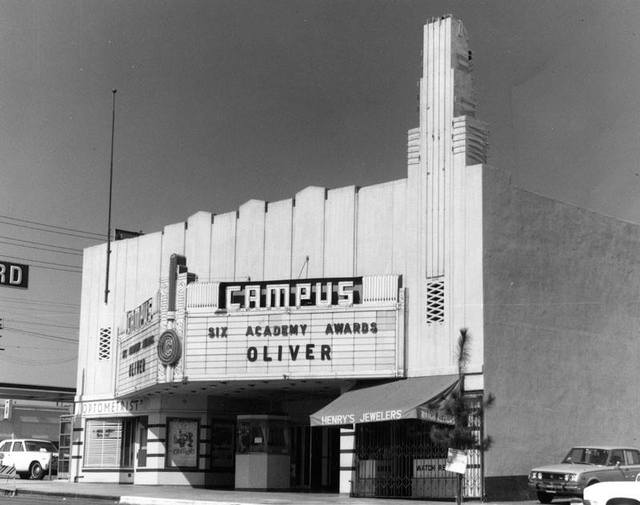 Located at Vermont Avenue and Santa Monica Boulevard, the Campus Theatre was opened on November 22, 1939 with Robert Young in “Maisie” & Bing Crosby in “East Side of Heaven”. It was last operated by Metropolitan Theatres from April 13, 1981 when it began screening Spanish language movies. It was twinned in the early-1990’s. It closed in early-2006.

I’ve been to the Campus theatre once back in 2003. I went to see “Spy Kids 3: Game Over” in 3-D. Apparently, while the original exterior of that theatre was torn down and renovated into a small modern look in the late 80s. The original single screen was kept fully intact, but not in very good condition. This theatre has lots of grime between the ceilings and the seats weren’t any good since it was very uncomfortable and had graffiti on some of them. The sound system in the theatre was very poor, mostly in mono. The screen was very small but it was the original screen.The good thing about this theatre is that they show first-run English-language films with Spanish Subtitles with triple features. I still remember that policy trailer from Metroplitan Theatres Corporation. I wish I could find it.

A 75-year-old housewife collapsed and died at Hollywood Receiving Hospital 45 minutes after her husbandâ€™s death was reported to her there. Police said Walter Young, 83, was in conversation with Manley P. Hall, head of a philosophical society, who had lectured minutes earlier at the Campus Theater, 1020 N. Vermont Avenue, when he dropped to the floor.

Young, police say, was taken to Hollywood Receiving Hospital, where attendants pronounced him dead. Forty five minutes later, his wife went into the hospital with friends. She collapsed and died when informed of her husbandâ€™s death.

Apparently the theater has been bought by a Hispanic theater group. They have renamed it “Teatro ChuperAmigos”. They stage plays and also lease out the theater to Lieberman Broadcasting who use it as a studio for a few of their shows. I’m glad to see the theater live on and not be turned into a strip mall. More info: http://www.teatroloschuperamigos.com/

The front facade is quite different from the historical photos because it looks like most of the original lobby was demolished at sometime, replaced with a recessed front and a nice courtyard in front.

Apparently the live operators have departed, and the theatre is vacant and available.

Apparently closed now. I posted two photos courtesy of Michael Moran. One is from circa 1968.