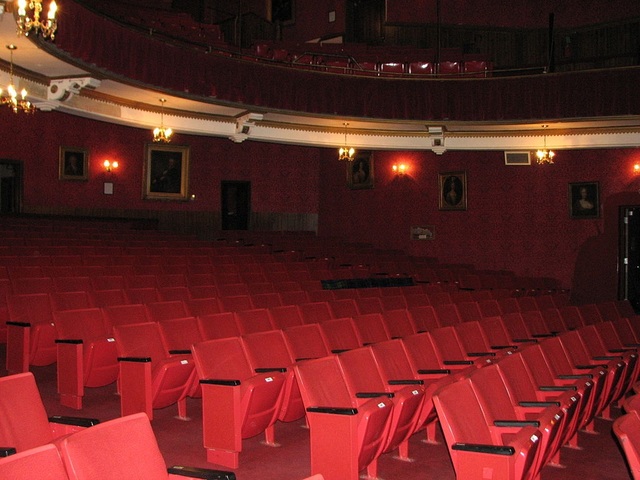 Opened on September 21, 1882 with a performance of “Maid of Arran”. The architect was Mortimer L. Smith who designed the theatre in a French Empire style. It has a red brick facade and inside the auditorium seating is located on the main floor (350 seats), second level (130 seats) and third level (87 seats) in the horseshoe shaped auditorium.

Used over the years for drama, vaudeville, minstrel shows, opera, concerts, lectures, dances, wrestling and also it was converted into a movie theatre. Stars who have appeared on stage include; Ethel Barrymore, Joseph Jefferson, Eddie Foy and Maude Adams.

It has undergone restoration and is currently in use as an arts center for concerts and live performances.

The Tibbets Opera House is listed in the 1897-98 edition of the Julius Cahn Official Theatrical Guide, an annual for roadshow managers. It’s listed as “Tibbet’s Opera House”. The seating capacity is given as 823, and admission prices were 25 cents to 75 cents. John T. Jackson was the Mgr. The house had both gas and electric illumination; the proscenium opening was 30 feet square. The stage was 40 feet deep. The theatre was on the ground floor and there were 7 in the house orchestra. Hotels for showfolk in Coldwater were the Southern Michigan, Arlington, Brunswick and the Ward House. Newspapers were the Times, Republican, Courier, Sun and Star. The local railroad was the Lake Shore & Michigan Southern. The 1892 population of Coldwater was 7,000.

It’s now used primarily as a community arts center. I lived in the Coldwater area from 1970-85, and it always seemed to be in a perpetual state of being renovated. It’s also known for its summer theater season, (but don’t get me started on what I thought of some of those productions). This website:

has a picture of it when it was a movie theater during the period of approximately 1930-1954.

The picture of the Tibbits as a movie house that I referenced earlier is now at: http://www.tibbits.org/history.htm

My grandfather Albert S. (“Al”) Johnson built and remodeled theaters and drive-ins throughout Michigan. His company was the Johnson Construction Co., and it was based out of Birmingham. The Tibbits Theatre remodeling job was completed in 1934 according to records compiled by Al’s son Albert S. “Bud” Johnson Jr.

The accompanying Kodachrome image, taken by Al Johnson in June 1948 fourteen years after his remodel job, shows the theater still in its 1934 “art deco” or “art moderne” style. The theater has since been restored to its original opera house style and is open to this day. Johnson theater work became something of a family affair.

My dad (Doug Gray) and paternal grandfather (Robie Gray) both worked for Johnson on theater and drive-in jobs for many years - as did Al’s sons Chuck and Bud Johnson. Dad related to me that during one theater renovation job, an old car (a Model T or earlier model) was discovered at the back of the original theater stage when an interior wall was removed. The car had been used as a prop for a theater production and had been left in place during an earlier renovation. When it was discovered, the theater owner assumed ownership and had the car delivered to his house.

I’m almost certain that this story referred to the 1934 Tibbits Theatre project.