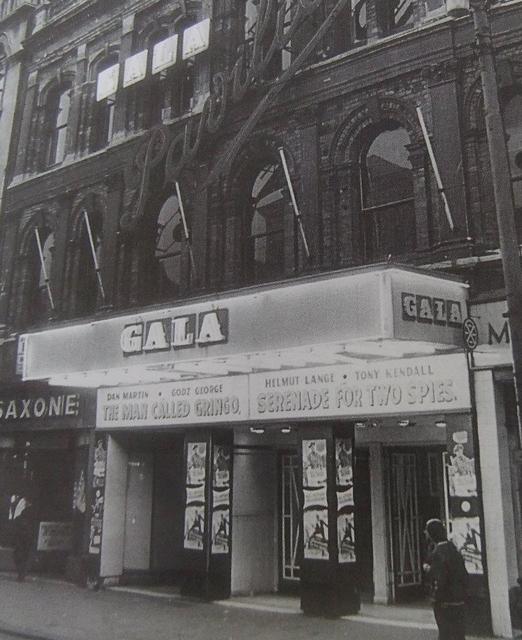 The Cardiff Philharmonic Hall 1876 can still be read on the outside of the building behind which is a "Square" bar/disco.
Over the years the building has housed various entertainments, from Music Hall, Stoll’s "Panopticon", and from c.1917 a full-time cinema called the Pavilion Cinema, operated by the Biocolour Company.

Associated British Cinemas took over the operation and for some years operated in conjunction with the "Queens", moving the manager and orchestra to the Pavilion Cinema while sound was installed for the first talkie “The Singing Fool” starring Al Jolson. The Queens Cinema and Pavilion Cinema became ABC’s second string when the Olympia Cinema was reconstructed and frequently showed the same programme.

After being given up by ABC the management passed to J.F. Emery Circuit in 1946 and advertisements reveal that most films were re-runs and occasional 75 minute cartoon shows.

The interior retained many old features and no attempt was made to accommodate CinemaScope in the 26ft wide proscenium. When necessary the screen masking was lowered and the edges of the image were blanked off.

The Gala Film Distributors company took over in the 1960’s and renamed the cinema and after some redecoration closed off the balcony and offered stalls seats at four prices for Continental films, art-house (e.g. Polanski’s "Repulsion") and many sword and sandal products from Italy.

Closing as a cinema in 1968, inevitably Bingo eventually took over and after that came to an end a major refurbishment took place restoring many of the features of the old building into which modern video screens were added within a "Music Hall " environment. For a time photographs were displayed in the foyer showing the building "before and after" refurbishment. Acoustic panelling and a reopened balcony were revealed.

In common with other cinemas the Pavilion Cinema also offered a soda-fountain, restaurant, and ballroom at various times.

An exhibition of Cinema Equipment from the collection of a local enthusiast contained a projector salvaged from the Pavilion/Gala consisting of an RCA Photophone sound head, Westar mechanism and a Peerless Magnarc.

The opening hours of the present bar were reduced when the J.D. Wetherspoon chain took over the building next door, the former Prince of Wales Theatre, itself a cinema from 1957 until it ended as an "Adult Cinema". In 2009, it was reported that the bar use at the Gala Pavilion Cinema had ceased and the building was empty and for lease. By 2017 it had re-opened as a bar named Coyote Ugly.

Photos of the Philharmonic Hall can be found here:–

Some of the building plans now located show many of the features of the building have survived several of the updates, though the side balconies supported on steel columns were lost (probably when the balcony was re-built for Bingo).
The present entrance and foyer is not original but has been very carefully constructed to resemble the old building.
Further research will be required to determine the extent of the work carried out to plans by W Glen ca 1929, probably for the new lessee ABC.

Further details of the early history of the Philharmonic Hall including drawings of the interior can be found in the “Western Mail” available at Cardiff Library on a searchable computer archive.
The building is currently undergoing external repair and is hidden by scaffolding (Sep 2008)

I can recall spending a few days of doing relief at this cinema some time around the early 1960s.The equipment was extremely ropey and badly maintained with the sound system having been rehoused in an old tin traveller’s trunk. The film we projected was also weird, a rough print possessing the title “Mondo Carne”. Basically a documentary with no plot whatsoever which was shown to an almost non existent audience.Thinking retrospectively,with films of that quality, it must have been a miracle that the Gala stayed in the film business as long as it did.

Plans now located reveal that only minor alterations were carried out by Biocolour, and ABC’s alterations dated December 1934 mostly involved rearrangement of the upstairs seating, in particular in the front part of the balcony where stepping was improved as was the seat pitch. The best of the existing seating was moved downstairs where spacing was marginally improved.
In a letter to the planning authority W.R.Glen gave details showing that the overall effect would be, Stalls 765 to 752, Balcony 326 to 308 “chairs”, providing “greater comfort to patrons” and improved access to Balcony stairways

An exterior shot of the Philharmonic Hall here:–

Have loaded a picture from the ABC Days….

Recently published photographs reveal that when the Panopticon became the Pavilion the original small entrance was still in use.The enlarged foyer and canopy , as restored for the now closed pub,was added shortly afterwards. In 2013 plans to adapt the building for a new use were proposed.

Following extensive exterior restoration and internal adaptation the Philharmonic Hall now trades as a “Coyote Ugly” bar.Adjacent buildings,(originally built as a hotel and restaurant trading under the Philharmonic name) have also been modernised internally and refurbished as a pub/restaurant,once again called the “Philharmonic”.