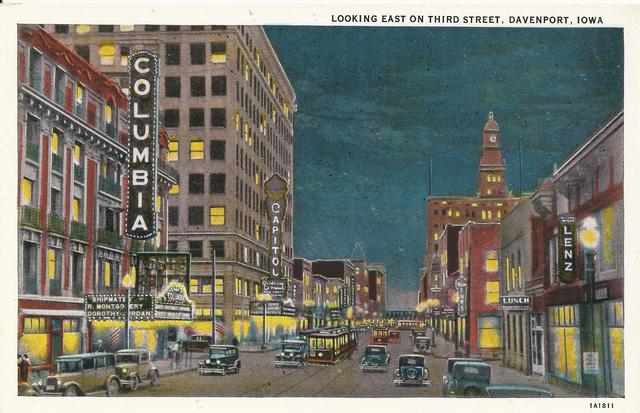 The Columbia Theatre was built in 1913 and was a vaudeville/live theatre, an early project from the architectural firm of Rapp & Rapp. It had a seating capacity of 1,800. It was closed in November 1931.

In August 1939 it was remodeled into an 834-seat movie theatre and opened on November 22, 1939 as the Esquire Theatre. All seats were on a single floor. The 1941 & 1943 editions of Film Daily Yearbook list it as ‘Closed’. The architects for the Art Deco style conversion were Wetherell & Harrison. Interior decorations were by Hans Teichert. It was operated by Paramount Pictures Inc. through their subsidiary A.H. Blank.

The Esquire Theatre was closed on January 7, 1959.

Lost Memory;Thanks for the additional information.
The 1941 edition of Film Daily Yearbook lists the Esquire Theatre with 834 seats (the Columbia Theatre is listed as ‘Closed’ with 1,800 seats). It seems like the re-model into a movie theatre gave a reduced seating capacity. However in the 1950 edition of Film Daily Yearbook the address of the Esquire is 408 W. 3rd Street and seating is given as 300 (which I would say must be a mis-print)

An article about the Esquire Theatre appeared in the December 9, 1939, issue of Boxoffice Magazine. The article includes some information about the Columbia as well.

The Columbia opened on Christmas Day, 1913, with 1000 seats. The article says that the Esquire was built “within the walls” of the Columbia, as a single-floor theater. The Columbia had seated only about 600 in the orchestra and 400 in the balcony, so getting the Esquire’s 835 seats onto one floor necessitated the removal of most of the Columbia’s stage. The roof was lowered as well, but the auditorium still had a fairly high ceiling.

The new theater was thoroughly Moderne in style, with just a lingering hint of Art Deco in some of the details. The Esquire was designed by the Des Moines architectural firm Wetherell & Harrison.

Volume 2 of The Papers of Will Rogers, edited by Steven K. Gragert and M. Jane Johansson, says that the Columbia Theatre was originally a two-a-day vaudeville house on the Orpheum circuit.

This looks like an aftermath photo from World War II. It’s actually a picture of the demolition of the interior of the Columbia Theatre on the northwest corner of Third and Ripley streets. It was taken during the early stages of the remodeling and transformation into the new Esquire Theatre. It appears that someone has painted “Capitol” on the back wall, in reference to The Capitol Theatre, the Esquire’s competition across the street.

The Columbia Theatre and Hotel was built in 1913 as Davenport’s new Vaudeville House and 40-room hotel. The very first “talkie” picture was shown there. In 1916, the great magician “Hardeen” was strapped into the punishment suit (straight jacket) and handcuffed by the local deputies from the sheriff’s office to perform an amazing escape before an anxious and appreciative crowd. Hardeen was the younger brother of Harry Houdini. Sophie Tucker, “The Last of the Red Hot Mamas” appeared at the Columbia for four days beginning on February 20, 1921.

The Columbia Theater essentially closed in late November of 1931 with the opening of the new RKO Orpheum. On Monday, August 21, 1939, work began on transforming it into a new 800-seat modern theater. It was scheduled to open in November as a first-run motion picture house with all the seats on the first floor. The building was completely remodeled from the entrance to the rear, from the ceiling to the basement. The stage, on which virtually all Vaudeville acts of former years performed, was torn out. The balconies were torn down and all the seats removed. Even the outside of the building was refinished and remodeled, with the owner, the Walsh Construction Company, in charge of the work, and Arthur Ebeling as supervising architect.

The new Esquire Theater was opened on Wednesday night, November 22, 1939, at 8 p.m. with a dedication program followed by the showing of “First Love,” starring Deanna Durbin, and “20,000 Men a Year,” featuring Randolph Scott and Margaret Lindsay. Representing an investment of approximately $55,000 in the remodeling of the former Columbia Theater, the Esquire took its place among the ultra-modernistic amusement centers, accommodating 850 people. Richard Stoddard was the manager of the Esquire, a picture house operated by the Tri-States Theater Corp., of which A. H. Blank of Des Moines was president.

Twenty years later, on Wednesday night, January 7, 1959, the last motion picture was shown at the Esquire Theater. Its demise left only four movie houses in Davenport, the Capitol, Orpheum, State and Coronet theaters. Its closing closely followed the end of the Sunset Theater on Fourth and Cedar streets, which ceased to operate on October 29th, 1958. Lack of patronage and increasing operating costs were listed as the reasons for the closing of the theaters.

The business district of Davenport was once the home of the Casino, Garden, Family, Star, Crystal, Mirror and Liberty theaters. In West Davenport, the neighborhood movie houses included the Pariser Garden, Olympic, Davenport, Zenith and Home. Northwest Davenport had the Washington Theater and the Elite Theater was on the northwest corner of Fourteenth and Harrison streets. And finally, at one time, Davenport also had two open-air theaters, one at Seventh and Sturdevant streets and the other at Locust and Harrison.