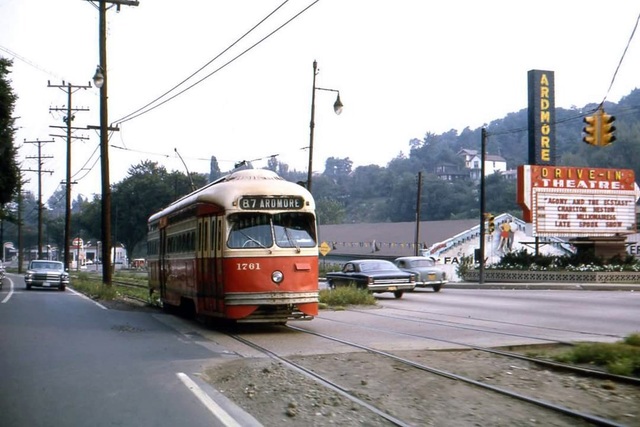 Opened September 4, 1959 with John Wayne in “The Horse Soldiers” & Doris Day in “It Happened to Jane”. The Ardmore Drive in was an outdoor-indoor theatre which had a capacity for 1,200-cars and 2 indoor auditoriums. Closed September 28, 1976. Located just off U.S. 30 (Lincoln Highway). The Braddock Hills Shopping Center now occupies the site.

I Now know the effects of gettiing Old! Many people I talk to Don’t even Remember the Ardmore! When we were kids in the late 1960s thru the 1970’s we spent more time at the drive-ins than in “real” theatres! Greater Pittsburgh up the road was bigger, but the Ardmore was my favorite! Anyone remember the playgound equipment there (I guess to tucker out the kiddies before showtime!) Nice feature for parents with 5 kids jammed on to the old Plymouth wagon!

The Ardmore Drive-In was one the Pittsburgh area drive-ins that my family frequented in 1960s (the others being the Silver Lake, Harmar and Greater Pittsburgh). The thing about it that stands out in my memory is the small auditoriums flanking the concession area that were mentioned in an earlier post.

I worked there for several years as did many of my family members. It was sad to see it close. Little did we know that it was a once in a life experience; wish I had been able to share it with my children and grand children.

Final night of operation was either September 27 or 28, 1976. The September 29 edition of The Pittsburgh Press reported construction of a Gold Circle department store on the Ardmore Drive-In site to begin the following month. The confusion of the actual closing date comes from the same article; it indicates that it “closed Monday” (27th), but there is a listing for the Ardmore in the following day’s paper (28th).

It was one of my favorite drive in,s around this area, probably 2nd to the Greater Pittsburgh Drive In. I still remember the playground in front of the screen, when I took my younger sister and brother there, they would play there. Also remember the two indoor seating area,s where you could sit if it rained or was cold. Took a lot of dates there too, probably made out more than watched the movies, but I did see a lot of good movies there, Death Wish was one of my favorites. I read somewhere once that the Ardmore was one of the most profitable drive in,s around, so I don,t get why the owners sold the property, guess they must have made some good money. I remember when they built the Gold Circle department store there in 1977. Remember going there and hearing the Bee Gee,s songs on the Saturday Night soundtrack, over and over, lol. Still surprised they sold the property and still another great drive in is long gone.

Does anyone know the history of that tram or trolley bus in the above photo?

That would be the old Pittsburgh Railways Trolley system. That was the 87 Ardmore line. It was the second longest line on system at 13.7 miles. It ran until January of 1967. Google and Wikipedia (sometimes) are your friends :)

Talking to myself again, I also wanted to mention that if you look at the 1959 Historic Aerial, you will see this Drive-In under construction, just months before it’s September opening.