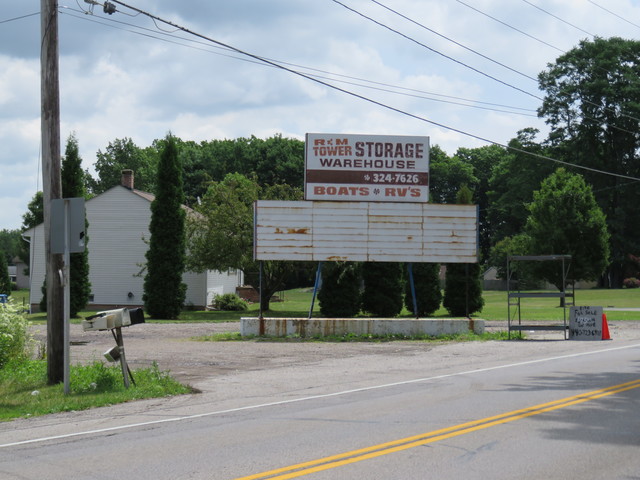 The Tower Drive-In is one of the ‘forgotten’ Lorain County drive-in’s, along with the Lorain Drive-In and the Carlisle Drive-In. The Tower Drive-In opened on May 20, 1950, screening the 1950 western “Sundowners” with Robert Preston, Chill Wills and Robert Sterling. The drive-in was named after a large communication tower, which still stands beside the theatre property. It was opened by Interlake Theatre Corporation from Cleveland, OH. Co-Operative Theatres of Ohio were the buying & booking agency. Paul O. Brake was the resident manager. The new drive-in had a 500-car capacity. It was operated by Frank Gidlin in 1952, and Helen Pentz 1953-1954. In 1955 it was operated by Al Boudouris (dba Theatre Operating Co. from Toledo, OH). I think it might have been operated by Selected Theatres after Boudouris.

The Tower Drive-In had gotten into trouble back in 1961 when the theatre was shut down by the Lorain County Sheriff’s Department over complaints lodged against films that contained “scenes of nudes of both sexes and suggestive dialogue”. The movies were “Hide in the Sun” and “The Naked City”. “Hide in the Sun” is a movie about being in a nudist colony and “The Naked City” is a film-noir type movie made in 1948. The latter was also a TV show 1958-1963. The drive-in was shut down as 12:30am at the request of the sheriff’s department. Clifford Deidrick, the theatre manager had to arrange for new movies to be screened the next day. Deidrick was a district manager for Selected Theatres in 1955. That is why I think that Selected Theatres were operating the Tower Drive-In at this time.

The Tower Drive-In finally closed for good at the end of the season in September of 1985. I believe that Interlake Theatre Corporation still owned it at that time. Most of the property was cleared, except for part of the screen tower. It is now used to advertise the R&M Tower Mini Storage Warehouse that now owns the property.

Here is a May 1958 ad from the Elyria Chronicle Telegram:
http://tinyurl.com/5a7qhm

The 6187 address takes you right to the sign if you plug it into Google Maps. Not very impressive, but I thought I’d mention it anyway.

The first drive-in that I can remember attending….I was three, and they were showing “BRIDES OF DRACULA”.

I have an interesting question about this drive in. I own a 1959 Jeep CJ5 that I just restored. When I bought it there was a label inside the glove box door that read “Tower Drive-In 2301 Elyria Township Ohio.” I’m trying to find out more information about this Jeep. I assume it was used as a maintenance vehicle for this theater. Anybody know anything about it? Thanks.

In the late 70s/early 80s, a bunch of us kids used to go into the drive in and turn up the speakers closest to the fence, near the Edwards grocery store. This way we could come back in the evening and view the movie through the fence while hearing it from the speakers we cranked up. I did see a number of movies the traditional way, that being paying for entry. But as a kid with limited spending money, our makeshift method was sufficient.

The movie screen still stands. If you perform a Google Streetview from County Highway 95 which runs just behind the current property, you can see a clear shot view of the screen. It has since been re-purposed as an advertising sign for the storage facility that now occupies the property. But, the screen is very much still there.

The correct address (at least for Google) is 6187 Lake Avenue, Elyria, Ohio as previously indicated by Bill Eichelberger. The screen is still standing, but that is the only remains of the drive-in. http://tinyurl.com/zfdnt4d

Side Note: The description states that the large tower the drive-in was named after “shares the space” which is incorrect. You can see the tower just to the SE of the drive-in, but it never was on the same property. I know, it’s probably too picky to change, but I thought I’d point that out.