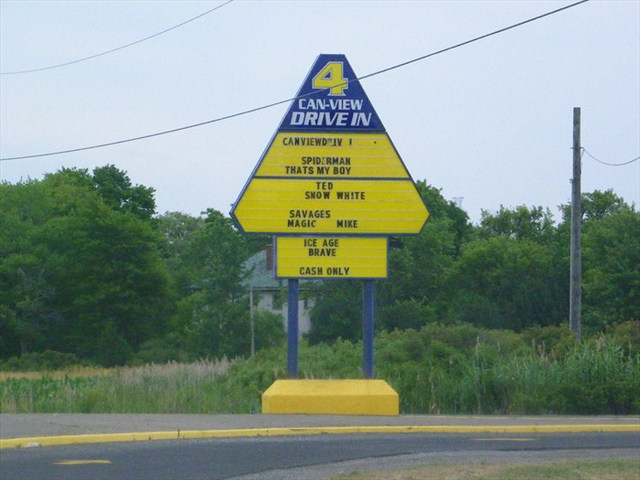 The largest drive-in in Ontario, has four screens and holds 2,015 cars. Located ten minutes from Niagara Falls, Ontario, it opened in 1983.

Kind of an unfortunate name, isn’t it? My first thought was that the cars faced the restrooms.

From Niagara This Week: The Can-View, a four-screen complex located off Highway 406 at Regional Road 20, was built in 1983 not long after the Dain City drive-in was shuttered. Its four screens and space for up to 2,000 cars make it one of the biggest outdoor theatres in the country.

Several Niagara This Week stories list Steve Forrest as the current (as of 2016) manager / projectionist of the Can-View. Forrest or his company bought it from Cineplex Odeon in 2001 or 2002, depending on the story.

Also, one of the Can-View’s screens was hit by a tornado on the afternoon of May 20, 1996, while the movie Twister was on the marquee. This birthed a Snopes-refuted urban legend that the tornado hit while that movie was playing, even during its climactic drive-in scene.