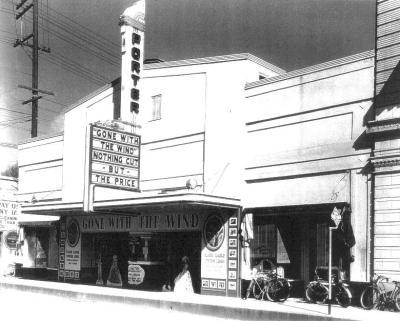 George M. Mann, profiled in a 1961 Woodland Daily Democrat article, built the Porter in 1936 with his partner Morgan Walsh. They purchased the old post office and hired architect William B. David to convert it into a modern theatre. It opened on November 26, 1936 with the Shirley Temple movie, “Dimples”.

When the Porter Theatre opened, the Legion Hall’s ad boldly proclaimed in large print that its admission was 15 cents all of the time. The Porter charged 25 cents for matinees and probably more in the evenings. To see a photo the Porter’s facade decorated up for “Gone with the Wind” and brief bios of Mann and David go to the Midtown Building web site.

The Porter closed in 1957 and in 1960 Mann’s son George and William B. David converted the Porter into the Midtown office building. For further information read the three-part series on the history of theatres in Woodland by David Wilkinson published in February of 2007 in the Daily Democrat.

I had a deposition in this building a few years ago. Very interesting. One of the facing streets is called Dead Cat Alley.

Here is the building website. Status should be closed:
http://www.midtownbuilding.com/