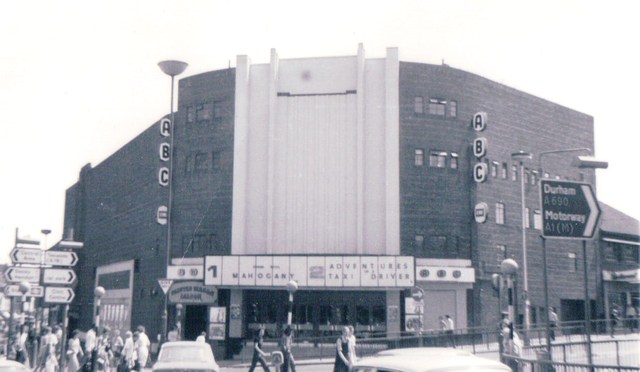 Opened on 1st March 1937 with Fred Astaire & Ginger Rogers in “Swing Tme”, the Ritz Cinema was built by the Union Cinemas chain. They were soon taken over by Associated British Cinemas(ABC). It was lavishly fitted with deep pile carpets and chandeliers.

In 1961 it was re-named ABC. It was converted into a two screen cinema from July/August 1974 when the former circle became a 534 seat screen and the front stalls a second screen seating 212. The rear stalls area was converted into a Painted Wagon pub. Sadly the conversion destroyed much of the original interior of the auditorium. It was later taken over by the Cannon Cinemas group, but later went back to the ABC name.

Sadly it closed on 29th April 1999, the last of Sunderland’s major cinemas. It has recently reopened as ‘The Point’ a nightclub which has four dance floors and has now completely lost all features of its cinematic past.

I used to do relief stints at the ABC prior to its conversion and it was 100% ABC design throughout with no ‘Union’ features at all. The plans had the architect’s name logged thereon:William R Glen – ABC’s ‘in house’ architect.

This was the only ABC in the North East designed by him; all other purpose builds were by Percy L Brown of Hartlepool. There were many other acquired theatres in the North East which became part of the vast Associated British Corporation.

The ‘twinning’ was carried out using most of the circle for screen 1( 550 seats with a new screen and tabs positioned forward of the ballustrade; rows A, B & C of the front circle were lost in the process). Screen 2 (212 seats)occupied the actors' left section of the rear stalls and the public house occupied the length of the stalls at actors' right.

I spent a short time as Assistant Manager here after the twinning and, in addition to the loss of the ‘big cinema’ atmosphere, the foyers also lost their style and grandeur by being boxed in and reduced vastly in size – such was ‘progress’ in the 1970’s

is there any pictures around of the old ABC?

just also wondering when the ABC was twinned – what happened to the stage area and front stalls area which did not seem to be used?

Was this originally a Union Cinema? There is a book about Sunderland cinemas, “The Dream Palaces of Sunderland” which states that it was built for Union Cinemas, and yet it is illustrated with a photo obviously taken when it opened, as the film that is being advertised is the first film to be shown, “Swing Time”, and above the canopy can be clearly seen two ABC triangles. The author also expresses surprise that it was originally to be called the Savoy, indeed surprising if it was a Union cinema, as they standardised on the Ritz name, but not at all surprising if it was an ABC cinema.

I commented about this back in 2009 and it was a project of Associated British Cinemas from the very outset.

Their in house architect, W R Glen designed the cinema and all the features within had his trademark stamped upon them, in particular the ‘gazelles’ on the splay walls which were to be found in other ‘Glen’ houses including the Regal Wembley.

Had Union Cinemas commissioned a theatre in Sunderland, they would, in all likelihood, have used the architects Verity & Beverley (who designed the Paramount Theatres)and there would most certainly have been provision for stage facilities, a restaurant and an organ to rival the Blacks' Regal in the town.

Many W R Glen theatres did have full stage facilities and restaurants but these were not present at the Ritz Sunderland. It was designed to house a Compton organ , however, but this was never installed.

I do believe that ABC had originally intended to use ‘Savoy’ rather than ‘Ritz’ at Sunderland – until, that is,they learned that this name was already in use in the suburb of Southwick.