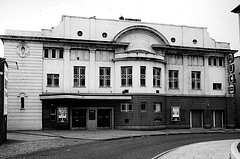 The Marina Theatre started life as a skating rink that, in 1878 was converted to a theatre by architect R.F. Brett. This proved successful and in 1901 noted theatre architect Ernest Runtz was called in to rebuild the theatre, using parts of the existing building.

In turn this was largely rebuilt in 1930 when the Marina Theatre re-opened as a cinema under the control of Associated British Cinemas(ABC), the architect this time was Francis Burdett Ward. Seating was provided for 962. In the 1931 summer season it briefly was taken over by the Thompson Enterprises Ltd. circuit. It was re-named ABC in 1962 and was taken over by an independent operator from 3rd August 1975 and re-named Marina Cinema again. A second screen seating 80 was added in what had originally been an old bar in the theatre. It closed at the end of 1984.

It was bought by the town Council in 1988 and converted back into mixed theatre/film use, just 24 hours before demolition was due to commence! It replaced the Sparrows Nest Theatre as a civic venue and required a lot of renovation.

It now seats 751, almost equally split between the stalls and balcony, with the projection suite at the rear of the stalls with a near level throw to the screen. It is decorated in a rather fierce green colour with seating in green and blue, the seating having originated from several sources (including the town’s former Odeon).

The proscenium arch (width 8.5 mtrs) is almost certainly that designed by Runtz as it closely matches the contemporary Empire Theatre Middlesbrough by Runtz, and is far higher than that need for a cinema. The stage is 9 mtrs deep and there are 5 dressing rooms and 2 band rooms.

Front of house space is minimal, particularly on the ground floor, but the Marina remains a great place to see a film in opulent, old-time surroundings.

A Suffolk seaside theatre is to extend its premises into a neighbouring building to provide a cafe.

The Marina Theatre, which was taken over by a charitable trust last December, is leasing the former Zenith call centre.

The trust which runs the venue said it will now be able to provide a bar and catering, new office space and better access for loading.

The theatre needs to raise £100,000 to join the two buildings together.

The lease of the new building will treble the amount of ground floor space the venue has and the box office will be moved.

Public appeal Martin Halliday, chief executive of the Marina Theatre Trust, said: “It’s going to be a lot easier for patrons to get in and out, have a coffee during the day and food before a show in the evening which is something that we’ve been wanting to do for many years.

“It is our wish to join the two properties together as soon as possible and we hope both the public and local businesses will be able to assist and we are announcing our Next Stage Appeal.”

The Marina is currently closed for a £250,000 refurbishment of its 750-seat auditorium.

It is due to re-open on 14 September with a show by the Royal Philharmonic Orchestra, which has had a residency at the venue since 2005.

Thanks Marina 2 for the new pictures.. Bought back memories of the Holiday Reliefs (While the Manager was on Holiday) I did there.. In the 1970’s

Early memories of the Saturday morning Kids club.. You could collect the ABC luminous badges, one boy came with his school blazer literally covered in them, and lit the place up.. probably succumbed to Radiation sickness by now..This and the Odeon were not far apart.. the Odeon was ‘Posh’ lol