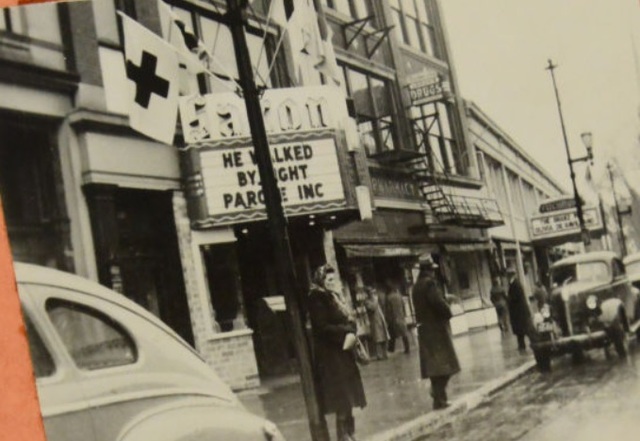 Originally opened as the Lyric Theatre in early-1914, and has been operated by E.M. Loew’s Theatres also Fred Lieberman Proven Pictures and Sack Theatres. It was renamed Saxon Theatre after World War II.

The MGM Theatre Photograph and Report form for the Lyric/Saxon in Fitchburg MA has 2 photos, one as the Lyric and one as the Saxon. There is only one photo date, August 14, 1946. It seems likely that the Lyric photo was taken at the same time as the other MGM photos in Fitchburg: May 1941, and the Saxon photographed in 1946, but I’m not sure of that. The theatre entrance was located at the left side of a 3-story commercial building. The Lyric had a triangular marquee, and it appears that the same marquee was adapted for the Saxon. In both photos, Loddy’s Pharmacy is to the right of the theatre entrance. Movies playing at the Lyric are : “ (unreadable)” and what looks like “Wyoming” (was there a film with that title?). Movies at the Saxon are" “He Walked by Night” and “Parole Inc.” There is no further information on the MGM Report. In the 1942-43 Motion Picture Almanac, the Lyric is listed as part of the E.M. Loew circuit of Boston, but also part of the Fred Lieberman Proven Pictures circuit. It seems likely that one of these circuits gave it over to the other in 1942. According to a post by “Winchendon” on March 17, 2006 on the page for the Fitchburg Theatre, the Lyric/Saxon was located next to the Fitchburg Theatre on Main Street. It had a balcony and stage (he attended concerts there), and was closed after about 1968 and eventually demolished. The theatre name, Saxon, was used in Boston by the Ben Sack theatre company, so one wonders if the Saxon in Fitchburg was also a Ben Sack house.

The Lyric in Fitchburg was indeed taken over by the Ben Sack theatre circuit.

Due to the interest taken by the above “ three comments ” all taken from the site below, I may remind you guys to read the “ Terms of Use ” found at the bottom of the “ Cinema Treasures ” website.
For people interested in the Saxon Theatre or an ongoing history into the theaters of Fitchburg MA.
I have included the site below :

Boxoffice Magazine for April 28, 1958 has a feature article on Ben Sack and the Sack theater circuit. In it, Sack says that he got his start in movie theaters with the Allen (Crown) Theatre in Lowell in 1950, and a year later he and his 2 partners got involved with the Lyric in Fitchburg, which they renamed “Saxon”.

As the Lyric, this theater is listed in the 1927 Film Daily Yearbook as having 992 seats,open 6 days per week.

A March 11, 1913 article in the Fitchburg Sentinel told of Cornelius J. Quinlan’s plans to build a business block with a 1000-seat theater on Main Street opposite City Hall. This was the location of the Lyric/Saxon Theatre.

Plans for the project were being prepared by the firm of H. M. Francis & Sons. Henry Francis died in 1908, so the lead architect on the Lyric Theatre was probably his elder son, Frederick. Younger son Albert was also an architect, but less talented than his older brother.

The earliest mentions of the Lyric being open I can find are from February, 1914. A December 12, 1913 Sentinel article referred to the “…Quinlan Theatre block now in process of construction….”

This was very close to the large Fitchburg Theatre at 717 Main Street to the East. Sadly the massive ornate hotel just west of the Saxon is vacant grassy land now. At least it’s not a parking lot…