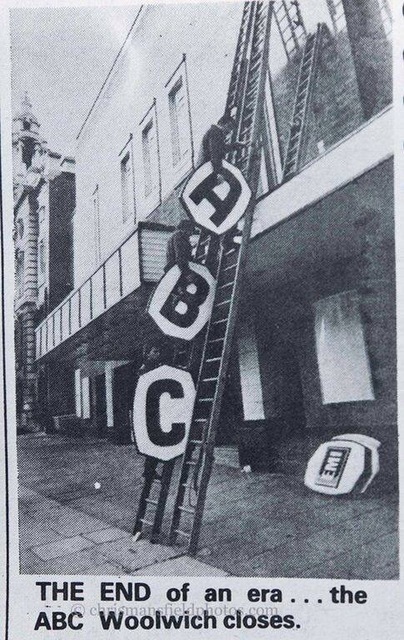 Located in the southeast London district of Woolwich. Built on the site of the Woolwich Hippodrome Theatre (1900-1939) which was demolished in 1939 (it has its own page on Cinema Treasures). Work began immediately on construction of the new Regal Cinema, designed by ABC in-house architect William R. Glen. Of course in September 1939 war was declared on Germany and all construction work was halted.

It wasn’t until the early-1950’s that building restrictions were lifted and work proceeded to complete the cinema, to revised plans by architect C. ‘Jack’ Foster who was assisted by S.E. Woodyear, G. MacFarlane and P. Turner. Gone were the original Art Deco styled plans of Glen and in came a more modern style suitable for the 1950’s.

The ABC was closed on 20th November 1982 with Lewis Collins in "Who Dares Wins". The building was unused and derelict for several years and was later converted into a nightclub, known as ‘Fusion’ and finally ‘N-tyce’.

In early-2007 there were reports that planning applications had been submitted to demolish the building, however, in May 2010, it was reported the building had been sold to an Apostolic Church. The church backed out of the deal, and it was sold to a community based theatre group in June 2011. It re-opened as a live theatre & performance space with plans to create & two-screen cinema, known as the Woolwich Grand Theatre. Sadly this did not go to plan, and demolition of the building began in November 2015.