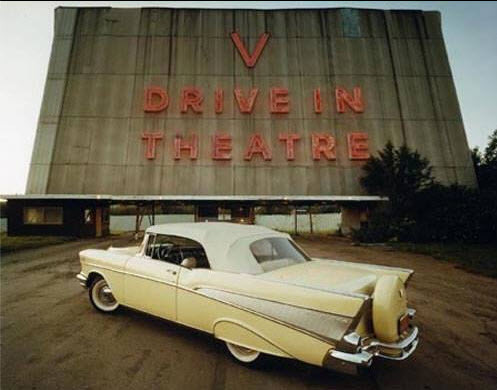 Opened August 18, 1958 with Glenn Ford in “3:10 to Yuma” & Sophia Loren in “Woman of the River”. The V Drive-In was located on the Vestal Parkway in Vestal, NY. It’s most distinguishing feature was that you drove into the theatre right under the screen. There was playground equipment on an embankment in front of the screen in its early days, but these were gone by the 1980’s.

The theatre was torn down in 1991 to make way for a large strip mall. A movie theatre now sits where the projection building was.

Above address is incorrect. Approx. address for this drive-in was 2531 Vestal Parkway East.

The Credit Union @ this address was the entrance. The concession building was where Barnes & Noble is located.

WALMART STRIKES AGAIN! The back of the D/I is Sam’s Club. Just west of where t he theatre stood is Walmart.

If this is the correct address I am really confused because the original V-shaped entry/ticket booth was made into a car dealership office that is still on the Parkway, today. Was the structure moved, or is the above location incorrect? The last movie I remember seeing there was one of the Star Wars. I have no idea which one, but it was more than likely the last of the first trilogy.

I also could have sworn this drive-in was already closed before the the mall construction started. A big problem with the two local drive-ins, toward the end, was rowdyism and crime. Infact, I remember a local newspaper article citing this as a major problem at both theaters, and a top reason for the other local drive-in’s, The Airport Drive-in, closing.

Dear lalainthelibrary, the car dealership you mentioned was Ken Wilson Chevrolet … a parabolic arch roofed building. Yes it still stands (though out of business). The V Drive-In was to the left of Ken Wilson’s as you faced it. If you hunt a bit you should be able to come up with an aerial photograph which shows the drive-in & the white parabolic roof of Ken Wilson’s is visible to the right of the drive-in. Jim Macumber

This opened on August 18th, 1958. Grand opening ad in the photo section.

Shortest name for a drive-in or any movie theatre?

Hi! I was a kid growing up in farm country on the outskirts of Windsor, NY, in the ‘70s-mid-'80s & was frustrated I couldn’t see all the horror movies that played here, incl. the dusk-to-dawn shows, or the triple feature of “Last House on the Left,” “The House that Vanished,” & “Don’t Look in the Basement,” which was advertised in the local paper as a big deal ev. summer, and which played well into the '80s. (As a kid I thought it was the title of one long movie! HA!) When I was finally 17 (1984?), both local drive-ins were showing A-grade movies, & it didn’t help when it closed around when the Walmart/mall went up. (I’m now 50, & it still bugs me!) I still feel like I missed something monumental, ya know? I don’t remember any crime, but I was younger & didn’t read the paper like I do today. It repeated the lst movie on Fri. & Sat., otrwise not. I remember it played “The Warriors” & “My Bloody Valentine” for 2 wks, & “Ruby” & “Legend of the Wolf Woman,” ag'n, for 2 wks, if I remember correctly. Finally saw “Wolf Woman” (it looks like Clint E.’s “Sudden Impact” ripped it off!), & it’s likely b/c it had lots o’ skin! This never did interest me. It killed me when “The Exorcist” was paired w/“LHOTL,” & the otr 2….could anyone tell me what it was like when any of these movies were playing & at the dusk-dawn shows? It still feels like I missed some big party (that prob'ly never existed, I know…!). Many thanks. Last I knew this D/I charged $6 a carload — don’t know if that ever went up tho. How’s that for a bargain? THANK YOU for this wonderful trip down memory lane!/Glenn