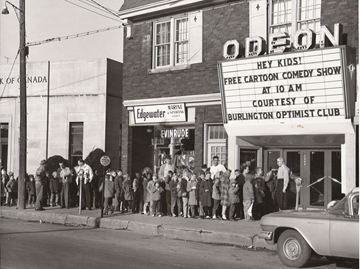 It was later renamed the Roxy Theatre and lastly, when operated by Canadian Odeon Theatres it was renamed Odeon Theatre.

The Odeon Theatre was closed in November 1981 and the auditorium has been partially demolished, with the front of the theatre converted into retail use.

I just found out some history about the “Roxy Theater” in Burlington & I know that It was located in The Downtown area & It open in 1949 & closed in 1960, not in 1980, that was the “Odeon Theatre”. But I could not find any more info on what street it was located on & I can’t find any photos of the “Roxy” in Burlington.

If anyone can help me with this problem, then please E-mail me @ – Thank you.

It has always been my understanding that the Roxy was renamed the Odeon. I have older siblings who will know for sure and I will let you know.

Hi: The Roxy was renamed The Odeon…my older brother and Sister remember the change. I went there when it was the Odeon dozens of times. It was located on the Lakeshore at the bottom of Brant street. There is a secret room there still, behind the little coffee shop. My friend’s daughter worked at the coffee shop and took her mother into the back to show her the remains of the old theatre.

A picture of the theatre as the Hume in 1946 from the Ontario Archives:
http://ao.minisisinc.com/Webimages/I0011922.jpg

Actually the Hume wasn’t the first movie theatre the Crystal was, even though they were owned by the same man. The Crystal burned down in 1930 and the Hume was built on Lakeshore

If you want to know all about the Crystal Theatre, a new book, Vanished Burlington, has a chapter about it, far its early days until it was destroyed by fire.

Rex Hume came to Burlington in 1924 to operate the Crystal Theatre, which he had recently bought, according to research by Peggy Armstrong of the Burlington Historical Society. Architect George Thomas Evans had his office in Hamilton, but resided in Burlington for at least part of his life, having designed a house for himself there in 1928. He was known primarily for designing churches and schools.

It would seem the old Odeon/Hume auditorium was demolished at some point. The front facade is indeed a retail operation but looking at Google Earth only a small part of the auditorium remains.