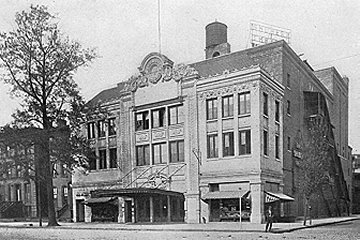 Opened as the Sam S. Shubert Theatre on January 8, 1912. It was located in what was then a residential part of North Broad Street, many blocks north of Newark’s main entertainment district.

By the 1920’s it had gone over to screening movies and was later home to Minsky’s burlesque.

Last known as the Broad Theatre and back on movies again, it closed in 1950 and was later demolished.

old post card. Incidently, I have a post card for another Shubert Theatre on Washington Street. Any insight on that one?

There appears to be no dispute as to the material facts. The Director of Public Safety of the City of Newark has threatened to revoke the license of the Broad Street Theatre if it presents a motion picture film entitled “Mom and Dad.” The license for the operation of the theatre is held by Rayhertz Amusement Corporation, a plaintiff, and the owner and exhibitor of the moving picture film is the plaintiff, Hygienic Productions, Inc. The proposed presentation and exhibition of the picture at the theatre is pursuant to a contract entered into between the plaintiffs.

On October 9, 1948, the plaintiffs, in accordance with practice and for the purpose of advertising the picture, held a preview to which were invited representatives of the City of Newark. The number of persons attending this performance is differently estimated, plaintiffs claiming that 140 persons attended while the defendants' affidavits give the number as 70.

The affidavits and exhibits submitted by the plaintiffs contend that the picture is neither lewd, immoral nor indecent; that it has been shown to audiences in more than 4,000 theatres in more than 40 states; that it has been shown in more than 30 cities in the State of New Jersey; and that it is presently being exhibited in some other municipalities within the state. The letters, photostatic copies of which are attached to the affidavit, include letters of recommendation as to the educational value of the picture, which deals with parental delinquency, and information concerning sex matters. It is alleged that the picture describes and illustrates the conception and delivery of a child at birth, both in a normal manner and by Caesarean operation, and it also depicts the ravages of social diseases.

Since the film under consideration deals with social sex problems, the following remarks of Judge Augustus N. Hand speaking for the United States Circuit Court of Appeals are pertinent: “The old theory that information about sex matters should be left to chance has greatly changed and while there is still a difference of opinion as to just the kind of instruction which ought to be given, it is commonly thought in these days that much was lacking in the old mystery and reticence. This is evident from the current literature on the subject, particularly such pamphlets as ‘Sex Education’ issued by the Treasury Department, U.S. Public Health Service in 1927.” In this case, the plaintiffs allege that the medical sequences in the film were procured from materials furnished by the U.S. Department of Health and filmed under the direction of public health officials.

We are dealing here with the threatened revocation of a license for the conduct of a legitimate business because of such proposed exhibition. The court has not viewed the film and does not make any comment on its merits or demerits, nor on its educational value, but disposes of the matter upon the facts presented and the law applicable.

I conclude that the Commissioner has no authority to interfere with the presentation of the film for the reasons urged. An order with a temporary restraint may be presented in accordance with these conclusions.