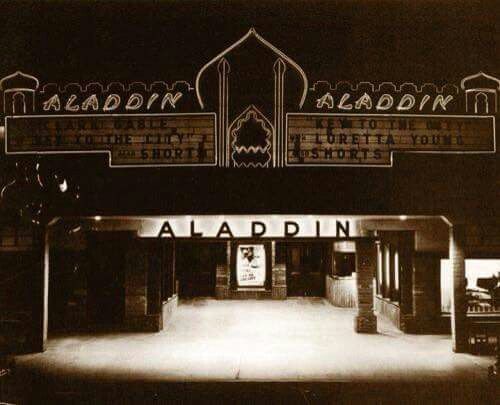 The Aladdin Theatre opened around September 1948 (although no mention is made in Film Daily Yearbooks 1950 & 1952). By 1957 it was operated by Robert L. Lippert Theatres Inc. Around 1958/1959 the theatre suffered damage from an arson fire.

It had a change of name to MKA Cinema in 1980 and it was later re-named Cine-Mex Theatre screening Spanish-language films. Closed in 1988 due to not complying with earthquake safety requirements. It suffered damage by a fire in October 1990 whilst in the middle of a remodelling project. It was ordered to be demolished and the owners said they intended to re-build…..

The Aladdin Theater was the victim of a major arson fire in approx.1958/59. The auditorium was completely gutted and was rebuilt a few months later. The theater managers were a couple with the last name of Van Gortel. The theater (along with the Desert Theater, and the Indio Drive-In) was owned by Robt. L. Lippert Theaters. My father owned a pharmacy in the Aladdin bldg. at the time. If I remember correctly, the projectionist was Ralph King. The theater was equiped with Motiograph projectors rather than Simplex.

The Aladdin was a great small theater in a good neighborhood when I lived just down the street on Tahquitz in the early-mid ‘70s. It was the ONLY nearby indoor theater. The Desert on Fargo was already showing Spanish movies and the only other nearby theater was a VERY small theater in Palm Desert which had been converted from office space, I think. Palm Springs, of course, had numerous indoor Theaters. Most of those closed during the summer, though. I believe the Plaza stayed open all year.

I remember going there one evening to find the “second” billed movie already playing. When I asked what happened to the other (Rancho Deluxe), the manager said it was so bad and so many people complained, that they pulled it. To this day, I haven’t seen Rancho Deluxe even though it’s been on TV numerous times.

The “Images of America” series book Indio, by Patricia Baker Laflin, says that the Aladdin Theatre opened in June, 1948.

I wonder how long the dickish judge managed to keep his theater open with that draconian policy? It’s not as though a farm town like Indio would be full of people eager to avoid children and snacks, or to pay extra when they took their kids to a movie.

I lost a piece of my childhood when this theater burned down the second time in 1990. I saw A Hard Days Night and Help, A couple of 007 James Bond Films, I think the last film I saw there was Easy Rider in 1969. I remember so many great movie experiences like The Great Escape with Steve McQueen. My brothers and I loved that place so much.

The Palumbo Boys (Peter, David, Mark, Craig-Moochie/Jamie/Tony and sister Lisa)loved The Aladdin Theater in the 60’s and frequented The Aladdin many times especially on hot summer days in Indio. Sister Lisa was born right across the street at Indio Memorial Hospital.

I wish I could find some photos. Can anyone please send some information. Please e-mail Jamie Palumbo,