Cinema 10 at the Miracle Center

This theater stood out in the South Florida first-run theater landscape when it opened on March 17, 1989. It was technically a tri-level structure within the Miracle Center mall, which opened up at the same time at 3301 Coral Way, right next door to the Gables Triple on what was once the site of a Grand Union grocery store. The two theaters actually co-existed between March and May 1989 before Gables Triple shuttered up for good.

The ground floor of the theater was located on the mall’s middle level, and housed the twin box offices, a small lobby mainly used to display the posters of current and upcoming releases, and the main theater manager office.

Patrons had a choice of either an elevator or escalator to transport them up the second level, which housed the concession stand and ten auditoriums that were extended across two long hallways. The third level housed the general manager’s office and another smaller office, along with the concession items storage room on one end of the structure; and the popcorn storage room, employee uniform room, utility room, and the enormous projectionist facilities along the other end of the structure.

I worked at this theater from June 25, 1989 to June 25, 1992. I started two days after the premiere of “Batman”, in the ultimate baptism by fire. Box office lines stretched halfway down the entire second level of the mall. We also hosted the midnight premiere of “Dick Tracy” in June 1990 with a racous but fun crowd.

The theater opened up in March 1989 with a week of bargain-priced showings of one to two year-old movies such as “License to Drive”. First-run movies were on by mid-March and were the staple until its sudden closing in October 1999.

The staff and management were extraordinary. A salute to Michael Doss, Barry Catoe, Manny Arce, Youseff Besisso (who went on to do a terrific job at the Riviera Theater), Todd Pierce, Toni Paris, Ana Romano, Raul Gonzales, Peter Romero, Richard Iglesias, Danny Wong, and Edith Quinto, all managers and/or co-workers who went on to management.

Even the City of Miami police officers who worked their off-duty shifts with us on weekends were characters in and of themselves. A salute to Officer Gary Green and Sergeant Eddie Blanco in particular, two cops who were a riot to work with because of their unique sense of humor.

A greeting as well to all of the crazies who served as my co-workers throughout the years and the mall patrons who became regular staples at the theater.

Blanco,
Thank You for correcting me, although I hate to be corrected, but coming from you it was well-respected and accepted, LOL.
Now, it’s my turn to correct you: How could you not mention one Miseal Fernandez, another cult personality manager that had an impact in his short tenure at the theatre..??!! To me, when you mention the Cinema 10 @ the Miracle center managers, I instantly think of ( and not necessarily in that order):– Lover-boy Doss, Cool Cat Catoe, Easygoing Manny, Moody Pete, Well-Respected Misael, the ready for anything Mickey, Cry-baby Richard, Well-Liked Edith and the Competent yet Confused Danny.
One can’t forget from the cast of characters:– the high-powered Bessy, the irrepressible Rosa, the forward-thinking David, the can do the job tag team of Fernando & Carlos, the inspiring and joyful Doris, the well-prepared Miguel, the Feleciano Carlos, the I Am An Expert Quinto and the cute….(well, you finish the rest).
Oh and by the way, I liked your piece in the cinematreassure blog and I hope more and more friends will read them all and respond.
Imagine a Cinema 10 reunion, that would be AWESOME…!!
Juan, it was a true pleasure working with someone like you who was not only dynamic and strongly ambitious but also a human being who have had a lasting impression on many people he worked with. I know that you’ll be successful in whatever path of life you choose.

This was the theatre with the parking lot entrance so steep my car kept falling backwards. A stopped going for fear of the parking lot ramp. My car would groan at the mere sight of it.

LOL Al, you were not the only one. The majority of us theater employess, being in our late teens/early 20s and whatnot, had older, used cars at the time. Had a few struggles going up that ramp myself!

Yes, that garage entrance ramp was doubly thrilling for those of us who drove a mid-80s Toyota Tercel with stick shift (but still nowhere near as heart-pounding as having to stop at the top of the former Centrust Tower garage ramp to make way for a slow-turning vehicle ahead, as a pickup truck barreled up behind me)…

One of Miracle Center’s first engagements was among the best afternoons I’ve ever spent at the movies: the 1989 “Lawrence of Arabia” restoration in 70MM. Excellent presentation in all aspects.
Also saw the restored “Spartacus” there, among other specialty fare.

Having a girlfriend in Coral Gables for a couple years led us to frequent visits. Remembering the crowds on weekend nights, I’m amazed Miracle Center had such a short shelf life.

I’ve created a Facebook page for all ex-employees/patrons of the Cinema 10 at Miracle Center:

Previews on March 2nd and official opening on March 17th, 1989. Grand opening ad below (which has a picture). 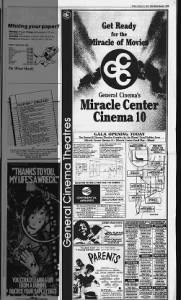