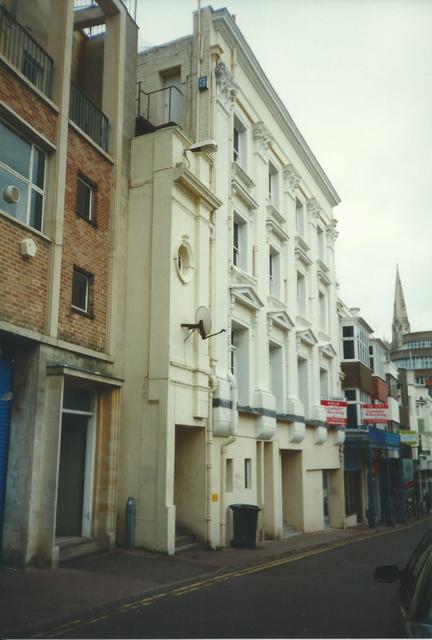 Opened as the Theatre Royal on 7th December 1882, the local architectural firm of Kemp, Welsh & Pindar were responsible for this live theatre. Internal decorations were by Walter Bevis to the designs of R.T. Sims of London. In 1887 it was converted into the Town Hall. In 1892 it was converted back into theatre use again and had 1,100 seats, re-named Bournemouth Theatre & Opera House. It was screening Bioscope films as part of the programme by 1912. It operated into the early-1940’s when it then became a services club, but suffered fire damage in 1943.

The Tatler Cinema Club closed in 1982 and this part of the building has remained un-used for many years. In 2004 it operated briefly as the Mine nightclub. The former bingo club in the downstairs stalls area is still in use, now as a casino which uses the former stage door entrance at the rear of the building in Yelverton Road. In October 2016 the building is offered ‘For Sale’. The exterior of the building is Grade II Listed.

Lost Memory; That link is to a photograph of a former cinema in Glasgow, Scotland (last known as the Tatler Cinema Club).

Lost Memory, that one is in Scotland !

The Tatler’s that I recall( er hem researched ) were cheap 70’s take-overs that made a quick buck out of soft-porn exploitation, often in run-down…or soon to be running-down areas…eg Walthamstow (former Empire cinema 1913 ), The art-deco restored Rio in Hackney ( Dalston exactly ), The Classic,the first ever called that, in South Croydon
Hope that helps a bit ?

The former Theatre Royal building now looks set to become a Portugese church according to the local press.

The opening programme at Bournemouth’s Tatler cinema club when opened on the 19 July 1971 was a double-bill featuring Hot Spur and The Tale Of The Dean’s Wife.

The projectors used at this cinema were a pair of Kalee-20’s, which were apparently bought from a cinema in Frome.

To become a member of the Tatler Cinema Club, you had to be eighteen or over and the price of a year’s membership back in 1971 was Â£1.00. The prices of admission were usually 50p but there was also a 25p concession price for guests and senior citizens.

I remember seeing Lita Rosa (a popular singer in the 50’s) in this theatre. I also saw Jason & The Argonauts in its cinema years. Sadly, this lovely building in now painted a ghastly shade of pink and looks very forlorn. Situated in one of the UK’s premier holiday resorts you would think that saomeone might have the imagination to do something more than operate a rather seedy casino.

There was also a news cinema incorporated into the premises, whilst still operating as a theatre. I’ve added the full page adverts plus a close up of the news theatre advert. It often went by the name of Premier News Theatre.

According to my diary I went to the News Theatre in Bournemouth on 1st. March 1958