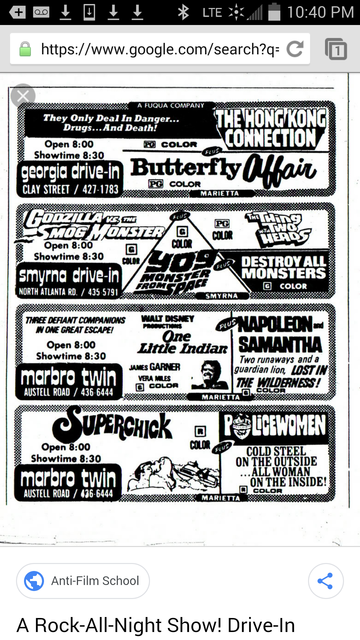 Opened December 19, 1968 with Sidney Poitier in “For Love of Ivy” & Alex Cord in “A Minute to Pray, A Second to Die!” in theatre 1 and Walter Matthau in “The Secret Life of an American Wife” & James Garner in “How Sweet It Is” in theatre 2. The Marbro Twin Drive-In was located in the Austell section of Marietta, GA. The two-screener was at that point “out-in-the-country”, away from airport noise and city lights and a great place for movies. Always double-features a first run movie would usually be followed by by a second film that would be at least five years old.

The two screens sat facing each other about a quarter-mile apart with the snack bar/projection booth seated directly in the middle. The dual-purpose two-story building was larger than usual and fired movies out both directions from up on top. As a result the snack bar was deluxe and had a full menu including pizza, cheeseburgers, and corndogs.

The Marbro was the “nice” drive-in in the area. While it may have had an Austell address, it would have been in the very eastern edge of Austell, close to the point where Smyrna and Marietta meet. The other drive-ins in the area (Georgia, Smyrna, etc.) showed more “drive-in movies” such as cheap horror, cheerleader, prison, etc. B films. The area where the drive-in was built was previously an airfield. The Marbro was always kept up and clean, and had a spectacular neon filled sign. It closed without much fanfair and was replaced with an apartment complex and shopping center. In the same area there is a closed Litchfield/Regal (pre-bankruptcy) 10-plex that is now a church. If there is any justice, the shopping center that took up some of the Marbro’s space has never been much of a success, as the better commercial area moved further down the road to the East-West Connector.

Many nights of a mis-spent youth included a trip to the Marbro, after a trip to buy beer! At least Atlanta still has the Starlight, ever if it is an hour away.

Here’s an aerial shot of the Marbro Twin from …1978(?).
View link
Just south of the twin (bottom right) the long dirt road can be seen that was originally the Wilkerson family’s driveway. When I visited their farm on occasion (their son David was my same age) I discovered the far screen was fairly visible from their front porch. I remember trying to squint and see “The Poseidon Adventure” , but the only scenes that made sense from that distance were those of the ship being rocked by underwater explosions near the end.
This was our main local drive-in for sure. I saw a ton of movies there growing up, (I saw the original “King Kong” there for the first time in 1976) and even more once I got my Driver’s License. Naturally, my first girlfriend and I went there quite a few times —but admittedly we watched a lot less intently.

Approx. address for this drive-in was 3475 Austell Road Southwest, Marietta, GA 30008. Station Club Dr. is where the entrance stood. The townhouses SE of this location was where the theatres stood.

I went here in September 1982 when I was 11, to see Star Trek II: The Wrath Of Khan. I have no idea why, but the night my parents took me there to see it, the screen was damaged and dark, and the sound from the radio was pretty bad too. Needless to say I didn’t even actually see the movie until a few months later on cable. Oh, well.

This opened on December 19th, 1968. Grand opening ad in the photo section.

“Pictured is a photograph of Martin Theatres’ Marbo Twin Drive-In on Austell Road. The photograph shows the sign announcing the coming of twin drive-in theater. According to Nancy Zimmerman, the twin drive-in opened in either late 1968 or early 1969. It was the last theatre that Martin built in Marietta and was the first and only twin drive-in theatre in the area. The theatre closed in 1987 and on the property now is The Ivy Commons Apartments. Zimmerman recalls going to the drive-in several times as a child in her pajamas with her parents and learning to drive at the drive-in. The manager of the drive-in was Richard Stanley, who treated Zimmerman like royalty in front of her friends and gave them free pizza, popcorn, whole dill pickles and drinks. She also pointed out that people often referred to the drive-in as The Marborol, but the name was Marbro which stood for the Martin Brothers – E.D. and Roy Martin Jr., who owned the theatre chain at the time. The Martin theatre chain was later sold to J.B. Fuqua Industries, then sold to C.L. Patrick who changed the names of all Martin Theatres to Carmike Cinemas and still operates the theater chain today.”