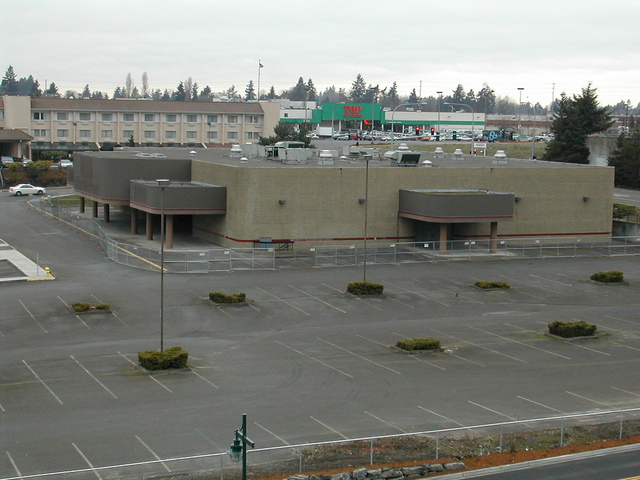 Closed in 2002. A 60s/70s era theatre judging by the dark brick rounded-edge exterior, paint-by-numbered walls of movie stars and earthy-brown stripe color scheme on the interior.

Bought by city recently and slated for demolition.

The AMC Seatac North was actually opened sometime during the early to mid 1980s. The original theater, AMC Seatac South was located in the Seatac Mall and opened in 1975. It was AMC’s first location in Washington state.

AMC renamed the Seatac North as the AMC Center Plaza in its later years.

It was the AMC style of the early 1980s. The AMC Narrows Plaza in Tacoma is a dead ringer, although it does not have the movie star mural in the lobby.

I got a little mixed up in my July 5 post. This theater opened as the Center Plaza 6. The name was changed to Seatac North in its later years.

The Center Plaza 6/Seatac North open ed in May 1983. Return of the Jedi was one of the opening films. Anyone know if it has been demolished yet?

Last time I drove by (about two months ago), it was still standing, but vacant.

It was demolished over a year ago.

Over the years between 2004 and 2008 or so, multiple mixed-used tower development projects were proposed by different developers, all of which fell through. The first was Symphony by United Partners, the second was an unnamed Korean project by Twin Development. The last proposal was to be the crowning achievement of architect Hisham N. Ashkouri, but after multiple extensions (and multiple assurances) he was (like the prior developers) ultimately unable to secure funding.

In 2014, after many years of lying fallow, the footprint of the building (bordered by its original foundation brick) was seeded with grass, the lot was repaved (leaving much of the original curbing in place), and it was opened in July 2014 as Town Square Park. After it was well received, the city invested in a proper park design and it reopened in July 2016. It is expected to be a complement to the in-development Performing Arts And Civic Center (PACC) to be built on the adjacent former Toys ‘R’ Us site.

Meanwhile in 2007 a 17-screen Century Theater opened in the former SeaTac Mall (now The Commons at Federal Way). The 8 screen in Gateway Center still exists, but it is now a Starplex and shows second-runs for $2.