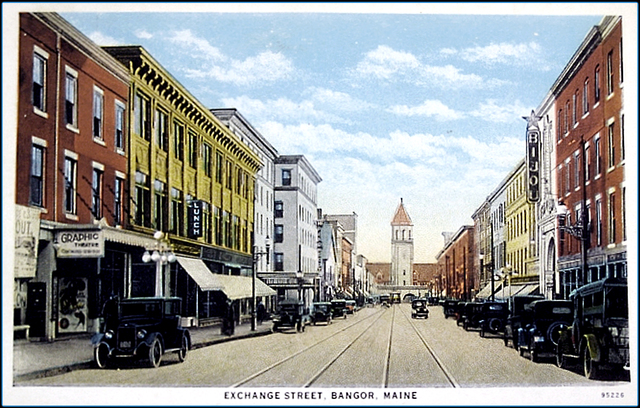 The Gem Theatre was opened on July 3, 1902. It was renamed Bijou Theatre on March 28, 1910. This was a very popular movie theatre with students like us at the University of Maine in the late-1950’s-early-1960’s. We were able to sit in the balcony on a section in the first row that jutted out of the balcony. I saw many first run movies during that time at the Bijou Theatre. Later on, I visited Bangor and saw that it has fallen prey to “urban renewal” having been demolished in 1973.

From 1920 a picture postcard view of the Bijou and Graphic Theaters which were across the street from each other in Bangor.

Thanks for picture ken mc.“DOCTOR ZHIVAGO” was playing there in 1971.

The Bijou was “The Prettiest Playhouse in Maine” according to the text of their advertisement in the 1914 edition of the Maine Automobile Road Book. There is a photo of the Bijou’s reasonably pretty auditorium.

Nice link Joe,did look pretty nice,also thanks Don, the Graphic Theatre would have a different meaning in those days,LOL.

An article by Wayne E. Reilly in the March 27, 2010, issue of the Bangor Daily News said that the Gem, which seated about 600, was taken over by the B. F. Keith vaudeville circuit in early 1910 and, after being remodeled, was renamed the Bijou. Keith’s promised to build a new theater for Bangor if the Bijou was successful.

The Bijou was a success, and the circuit kept its promise. Another article by Reilly, from April 15, 2012, tells about the new, much larger Bijou that opened on the same site on April 18, 1912.

The Bijou was demolished in 1973, another victim of the destructive fad that went by the unintentionally ironic name urban renewal.

This web page says that the general plan for the rebuilt Bijou Theatre of 1912 was by architect Wilfred E. Mansur, and the theater interior was designed by Philadelphia theater architect Albert E. Westover.

A 1922 directory lists the Bijou Theatre at 164 Exchange Street.