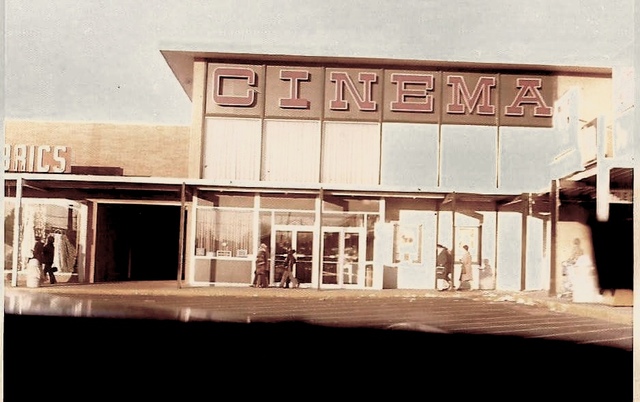 This theater opened in what was commonly called the Korvettes shopping center on the edge of Trenton on May 28, 1969. It was twinned sometime around 1973 and was still open and listed in the 1976 International Motion Picture Almanac. Probably closed in the late-1970’s or early-1980’s as the Mercer Mall and Quakerbridge Mall theaters began to take away patronage.

I believe that that entire shopping center is still standing but vacant.

The “Korvettes” shopping center is operational . The Capitol Plaza twin was converted into store space. Inside the store, you can tell it was a theater. Obviously, the floor was leveled off.

The theater was situated in the “L” of the center – behind it is the intersection of Spruce Street and Princeton Ave. It was a 1000-seater originally. The address above is also correct.

The Capitol Plaza Cinema (General Cinema) opened on May 28,1969 as a single theatre that seated 1,000. The first film to play there was “Where Eagles Dare” starring Richard Burton and Clint Eastwood. The bargain matinee price was 75 cents. The theatre also had a smoking section on the left side of seating as you entered. My mom was hired in 1970 to work behind the concession. During the early seventies the theatre was twined by simply putting a wall down the middle. This left Cinema #1 with a smoking section only, which would prompt movie goers when asked “which Movie?” “Give me a ticket to the one you can smoke in” My mom left when Mercer Mall 3 opened in Lawrenceville NJ (across from Quakerbridge mall ). I also worked at Capitol Plaza during the seventies until I became manager around 1978. I left around 1979 when the theatre was taken over by BUDCO theatres. If you would like to see some photos of the people that were employed there between 1976 – 1977, please visit my website @ http://mysite.verizon.net/vze7opkb/ There is also a page that contains the grand opening newspaper ads from 1969. I do not have any photos of the outside of the theatre, if anyone should have some, please contact me on my website.

i saw my first movie there

The original Capitol Plaza Cinema had a huge Panavision screen, and it was a real pleasure to see films like “Where Eagles Dare” and the reissued “Ben-Hur” there. In 1972, that screen fell victim to one of the worst conversions ever, as a wall was built right down the middle of the theater. Upon entering the newly-“twinned” auditoriums, one felt as if one were looking through the wrong end of a telescope (the screens were later enlarged slightly in the late 70s but it was too late). Nevertheless, the twinned theater did excellent business in ‘72-‘74 with big hits like “The Poseidon Adventure,” “Paper Moon” and “Lady Sings the Blues” as well as many Disney films new and reissued (many Trentonians in their 50s will recall seeing “The Love Bug,” “Peter Pan” and “Fantasia” at Capitol Plaza). As the 70s wore on, and competition increased from the new Quakerbridge 4 and Mercer Mall Cinemas, the bookings got worse and business fell off further as the Capitol Plaza shopping center went into decline. But many Trentonians have fond memories of seeing “The Godfather” and other hits on the original, big screen. (I worked at Capitol Plaza as usher and projectionist from 1972 through 1975).