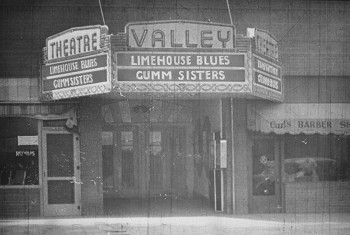 Operated by Western Amusements as the Antelope in the early sixties.

The Valley and the Antelope are actually two different theaters and for a time, they coexisted.

The Valley Theater was built in 1927 by Whit Carter; it was destroyed by fire in 1953. It faced what was originally called Antelope Avenue (present-day Sierra Highway) on the current site of the Lancaster Museum & Art Gallery at 44801 N. Sierra Highway. It is notable because it was operated by Frank Gumm—the father of Frances Gumm, better known as Judy Garland—from circa 1927 to the mid 1930s, after the Gumm Family had moved to California from Grand Rapids, Minnesota.

The Antelope Theatre was constructed by Dave Roach in 1948, on the site of today’s Lancaster Performing Arts Center at 750 West Lancaster Boulevard. It had ceased operating as a movie theater by the mid-1980s, and in 1990, was torn down to make way for the new performing arts center, which opened in 1991.

Thanks for the clarification.

I spoke to Norma Gurba, the author of the book you mention, before my October 2007 post, so that’s where I got that September 1953 fire date. I do live in Lancaster, and will follow up on this as time permits (perhaps in late September). I’m not sure when the Antelope Valley Press (today’s sole surviving daily) began publication, or where their morgue is archived, but they might be another resource.

At one time the Ledger-Gazette’s offices were located on the corner of present-day Sierra Highway and Milling Street, literally across Milling street from the section of storefronts and bars that burned along with the Valley Theater. Whether the Ledger-Gazette was located there in 1953, I don’t know. But if they were, I agree—they would’ve covered the event, wouldn’t they?

If you’re ever in town again, ronp, contact me via this website and perhaps we can compare notes over a cup of coffee at Katz ‘n Jammers.

After a little Internet research last night, I found that the then-South Antelope Valley Press (now Antelope Valley Press) began publication as a weekly in May of 1950. So, if the Valley Theater burned circa 1953, they should have the article in their morgue. I’ll let you know what I find out in a couple of weeks.

The actual date that the Valley Theater was destroyed by fire is evidently the 26th of February, 1953. (An article appeared in the Los Angeles Times on February 27, 1953.) I’ll go to the Lancaster Library this week to see if I can find the Ledger-Gazette article to confirm it.

The Valley Theatre did in fact burn down in 1953 or 1954. The reason I’m not sure which year it happened, is because I was very young at the time when my father was transferred to Lancaster from another location working for the “Western Amusement Company” who also purchased the Antelope Theatre from Mr. Roach. My father managed the Antelope Theatre from 1949 until he passed away in 1981 all the while still employed by the Western Amusement Company, a total of over 50 years. In addition, he also Built, named and managed the Jet Drive-in theatre for them from 1955 (when it was built) until his passing in 1981.

To Dumpy, This must be Dumpy Myatt. I lived down the street from you in the early 50’s and walked past your house everyday on my way to Park View Elementary. I remember that your dad was at the Antelope. We used to go there every Saturday from 1953 until 1956. $.25 admission, $.10 popcorn, $.05 candy (Neapolitan taffy, sugar daddy, big hunk). I also saw movies at the Valley before the fire with my dad. Glad to hear you are still around and still interested in movies.

Circa 1950 image added via Norma Gurba-Kleit.