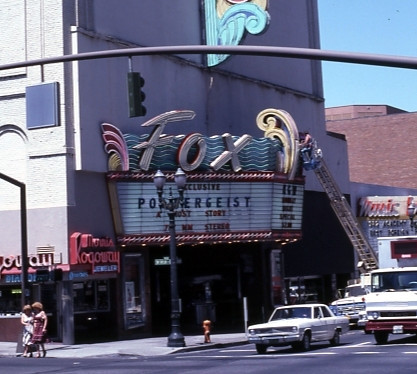 Originally opened in 1910 as the Heilig Theatre, designed by architect Edwin W. Houghton. It went through may owners and name changes over the years. It was closed in early-1954 and was gutted internally and was remodeled to the plans of architect Carl G. Moeller to reopen as the Fox Theatre on July 29, 1954. This gorgeous Art Deco style movie palace had a freestanding ticket booth. Like so many others, it has been demolished.

Corporatism killed it and now there’s a hideous and soul-dead sky scraper there.

It was 50 years ago today that “The Sound of Music” premiered at the Fox. With a reserved-seat run of 116 weeks, it’s almost certainly the long-run record holder for this venue. (Anyone know of something that ran longer?) It was one of ten runs in the United States and at least 24 globally that ran the movie continuously into a third year.

I just acquired a Cash Box/Ticket dispenser marked Nelson & Son Mayfair Theatre Bldg. Portland, Oregon w/ Patent #. Trying to figure out what to do with it. I’ve been researching for any Portland theatre historical societies with not much luck….

1974 photo added via Kevin-Michael Moore‎. The Music Box Theatre to the right of the Fox, is neither the former Liberty Theater nor the other Music Box listed in Portland on CT. Any ideas of what it’s former name might have been, so I can post the photo on that page too?

Dave, The theater next to the Fox was built in 1959 and opened with the roadshow of Ben Hur. It was named the Music Box from the get go.

Thanks. Apparently it does not have it’s own CT page.

I had notes for the sixth (and final) Music Box Theatre in Portland and intended to submit it ages ago, but must have overlooked it. Now the notes have gone missing. What I can gather quickly is that it was built into an existing building, its formal opening was on January 20, 1960, with 628 seats (later reduced to 611, probably to fulfill ADA requirements,) it was equipped with DP70 projectors, it closed before 1991, and was demolished in 1997, along with the rest of the block, for the Fox Tower project.

I’ve submitted a CT page for the Music Box Theatre next door to the Fox, including Joe Vogel’s information above. As well as additional info I found in a PDF, which I will add with photos once the page is up. For the record it was built in 1924 as the Broadhill Building, and remodeled in 1959 into the Music Box.

Below is a link to the new page for the Music Box Theatre. It includes a pdf link that must be copied & pasted to access and open, that has the full history of the building from the Historic Resource Inventory of Portland. Also below is a PDX History link that has photos of most Portland theatres.

When did Portland’s Fox close? What was the last movie to play?