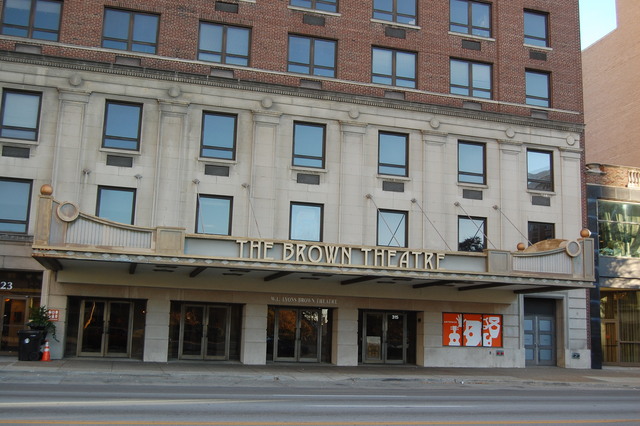 Opened on October 4, 1925. Designed in a Neo-Classical style, it was modeled after the Music Box Theatre in Manhattan, New York. Known to be in business showing first-run mainstream films in 1960 in downtown Louisville, KY. I drove by it several times during that year and have an advertisement for the theatre showing Walt Disney’s “Kidnapped”. The Brown Theatre was restored in 1998.

This theatre was operating as far back as the 1920s

The theater is partially visible in this photo:
http://tinyurl.com/5aqo9q

I wasn’t aware that you had posted from the Louisville library. Is that on another page?

New Showcase Presentations in Louisville article includes mention of the numerous 70mm (and roadshow) engagements here at the Brown (along with other Louisville cinemas).

Trouble at the Brown:

Dorothy forgot her lines, the Cowardly Lion looked more like a bear and the magical land of Oz was displayed on a laptop projector.

A subpar performance of “The Wiz” put on by a concert promotion agency this past weekend at the Brown Theatre has caused dozens of Louisville customers to call and demand refunds, according to an employee at the Kentucky Center For the Performing Arts.

“The Wiz” is an adaptation of the classic 1939 film “The Wizard of Oz” starring an all-black cast.

Island Entertainment KC, of Kansas City, Missouri, put on two shows Dec. 1 at the Brown Theatre. Tickets cost between $35 to $65.

Several people were distraught over the performance and wanted their money back, an employee of the Kentucky Center told the Courier Journal. The person declined to give a name because the employee is not authorized to speak publicly.

“The whole thing is weird,” the employee said. “Some people didn’t stay more than nine minutes through the show. There was a woman who was so distraught she walked out and spent the entire time talking to the ticket sales people as the show was going on.”

Helen Barnett, who spent $65 for seats, said she was a fan of “The Wiz” because of its all-black cast. But she described the show as “janky.”

“It was terrible. Dorothy was wearing a Walmart dress. They forgot their dialogues … at one point Dorothy said she wanted to go back to Texas!” (In “The Wiz,” Dorothy is from Harlem while Dorothy in “The Wizard of Oz” is from Kansas.)