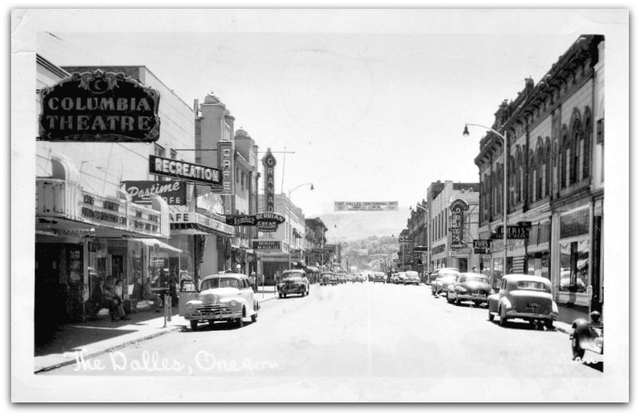 When the Granada Theatre opened in 1929, it was the first movie theatre west of the Mississippi designed to show "talkies."

The architect was William Cutts
atmos.

A Robert Morton 2Manual/6Ranks organ was installed in 1929.

“The year is 1929 … the end of the "Roaring Twenties,” Herbert Hoover was president, Packard was the top-of-the-line automobile, everyone was dancing to Sammy Kaye, the crash of the stock market ushered in the great depression, and the M.R. Mathew family opened The Granada Theatre at a cost of $125,000.00.

Plans for this Moorish style motion picture theater were prepared by William Cutts of Portland, Oregon, who designed approximately sixty theaters for the Universal Picture Corporation during his career.

Planned at the height of the silver screen era, the theater nonetheless was equipped with “Vita Phone” and “Movietone” sound systems, and was the first thester west of the Mississippi River to feature “Talkies”. While the facade of the concrete building was designed to imitate Moorish architecture, the stucco finish, accented with brick and tile, along with domed towers, arched windows with spiral columns, and arcades parapet create the exotic atmosphere of the Mediterranean.

The original building was designed to seat 600 guests and featured a large curtained stage, pipe organ and orchestra pit. In the 1950’s, an energetic remodeling program added an exterior ticket booth, neon marquee, snack bar and new “Art Deco” decor in the lobby.

Operated by the Rose Moyer Theatre group out of Portland, Oregon, The Granada closed its doors as a theater in the early 1990’s and remained closed until April 20, 1996, when The Granada Theatre once again opened its doors. Newly remodeled with such additions as the spectacular sky ceiling in the auditorium, and the addition of the Backstage Art Cafe complete the offerings of the facility.

Through the years until 1993, the building was home to many retail establishments. One of the first tenants was the “Siberian Ice Cream Parlor” which boasted of being the first retail outlet for soft ice cream in the state of Oregon. The last tenant to leave was “Bill’s Barber Shop”, which is still going strong at another location in historic downtown The Dalles."

“Granada Theatre, As It Appeared When Completed
(December 19, 1928)

An artists sketch of M.R. Mathew’s new theater building, now under construction here, was received here today, with the announcement that the theater would be opened early in the spring by Mathews-Moran Amusement Company, Inc.

The building is now being wired and prepared for the installation of both Movietone and Vitaphone, the two genuine talking and sound devices that to date have synchronized all big pictures, such as “The Jazz Singer,” “Singing Fool,” “Glorious Betsy,” “Lion and the Mouse,” “The Terror,” and all pictures showing at the Blue Mouse and Music Box theaters in Portland.

This equipment was ordered by the company last July, and the installation date is causing concern, on account of the rapid progress of the building, they said today. It requires about nine months to get delivery of the Vitaphone and Movietone equipment, although two factories are now running day and night in an effort to meet demand, it was pointed out by company officials.

This equipment consists of a car load of delicate electrical apparatus, which will be routed directly from the Electrical Research Products Inc., N.Y., to The Dalles, and will require about three weeks' time for installation after it arrives."

Since the article mentions that Portland’s Music Box and Blue Mouse theatre’s were already showing “talking and sound” pictures, it would seem that the Granada was not the “first theatre west of the Mississippi with talkies”.

Here is a B&W photo:
http://tinyurl.com/ctsmut

On March 30, 2017 it was announced that the Granada has been sold to the owners of the Watseka Theatre in Watseka, IL. Their plan is to restore it and present the same type of shows they do at the Watseka. See link below for story from The Dalles Chronicle.

The history written April 2006 omits the period from 1970 to 1980 when Jim and Marie Hutchens (now Easter) leased the building from Mathews-Moran Amusement Co. The Moyer group did not shut it down (did they ever even lease it?), After that someone had live entertainers like Gordon Lightfoot do concerts there, and we enjoyed going there from Madras. After that someone else operated it as a movie theater once more. I am happy to know that it will be restored, but also know that Mathews-Moran (if they still owned it) made a killing by selling it to The Dalles for $385,000+, when it is in need of so much renovation and the equipment is obsolete; and then the City sold it for $60,000! Taxpayer money lost?