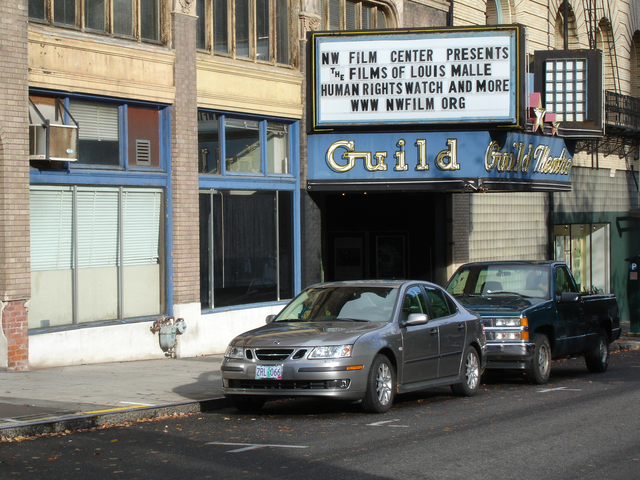 Originally opened as the Taylor Street Theatre, it was operating as the Guild Theatre since 1948, and was renovated in 1956. It was last used by the Northwest Film Center for film festivals.

Opera Theater Oregon (OTO) is preparing to submit a lease offer on The Guild which, if accepted, would restore the building and open the doors again in 2011 or 12 as a live venue/independent film house:

I know a lot of people have wanted to set this gem of a theater back on its feet and running again. Hope to have good news soon!

Good Luck on your lease,hope that you keep the marquee, very cool looking and historic.

Hi — I happened to look at the statistics box at the top, and I can fill in some of the blanks after all my research on this property: the building was designed by a very prominent local architect, Luther Lee Dougan – a lot of Dougan’s buildings have survived. The Guild was designed as a recital hall for the musicians renting studio space in the neighboring Studio Building, which accounts for its sweet acoustics. The two buildings are still on the books as a single property, though they stopped operating in tandem fairly early in their history.

The reason the Guild is a ‘reverse theater’ is that it originally shared an entrance with the Studio Building – – audience members entered at the rear of the auditorium and moved down toward the stage. The area that is now the lobby used to be the stage. Two small front rooms behind the current box office are labeled “chorus rooms” on the original plans.

The entrance was moved to 9th Street in the 40s, and a tiny, hall-like lobby was created where a men’s dressing room used to be. This is when the Guild became a ‘reverse theater.’ The stage and orchestra pit remained intact until the big renovation in 1956 turned the stage into the lobby and covered the pit (my conductor is dying to excavate it – – I’m not sure such a thing is possible on our budget). High, high above the lobby, above two layers of false ceiling (one vintage 1956, one vintage 1977ish), visible only from the top of the stairs near the entrance to the office space, the old fly rigging still hangs.

She’s a beaut, the Guild.

The lease offer made by Katie Taylor’s group, Opera Theater Oregon (see above) has been rejected by the Guild Theatre’s owner: View link

A few photos can be seen here and here.

This opened as Guild on September 4th, 1947. It’s grand opening has been posted here.

As previously mentioned the Guild is owned by TMT development, which was founded by Tom Moyer, as in Tom Moyer Luxury Theatres TMT. The TNT website still lists the theatre as vacant and available for development.