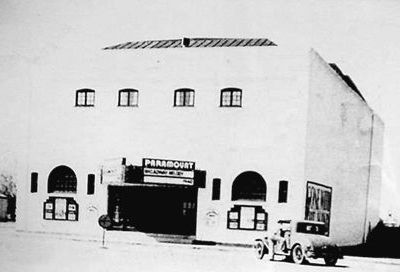 In 1946, architect Robert O. Boller redesigned the building, completely changing its appearance. Charles and O.L. Jones of LaCrosse were the contractors.

The entrance was lowered to street level and a glass block box-office was added. The theatre featured a “cry-room”, refreshment bar that served from both the lobby and foyer, and balcony.

The front exterior was covered in buff stucco with chocolate-brown trim. The art deco style main room was finished in dusty pink accented with burgundy wainscoting and burgundy, blue, and gold draperies on a screen thirty feet wide. The main floor seated 350 patrons in red velvet orchestra seats and the balcony seated an additional 174 patrons.

The Larneds operated the Paramount Theatre until the late-1960’s. In 1971, the theatre was reopened by Sterling and Steve Bagby for a short period of time. It was razed in 1981.

Here is an undated photo:
http://tinyurl.com/6eu8tp