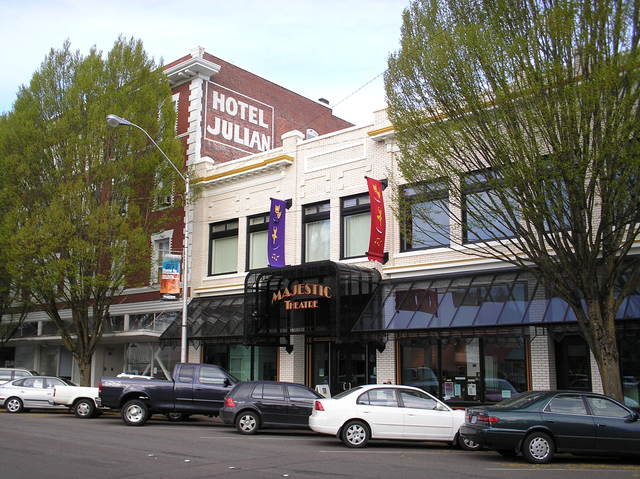 It is now operating as the Majestic Theatre again, now a live theatre and also screens classic movies.

I saw and photogrpahed the exterior of the Majestic week-before-last. The brick exterior appears all original. The attractive—albeit contemporary—marquee is nicely proportioned, and stars with names of donors to the theatre are set into the sidewalk out front. The lobby is completely contemporary in design. I am told that the auditorium retains some features of its historic appearance.

The Majestic Theatre’s web site says that their house opened in August, 1913. Here is an item about an unnamed theater to be built in Corvallis, from the January 21, 1913, issue of Building and Industrial News:

“THEATRE— 2 story, and base, brick and concrete, $30,000. Corvallis. Ore. Architect, George Post, Salem. Owner, M. Porter. The building will contain a main auditorium seating in the neighborhood of 900 people. Construction will be of reinforced concrete with exterior walls of pressed brick and terra cotta. A central heating system will be installed. Interior will be finished in metal and ornamental plaster. Floors will be of concrete. Stage equipment will be let under a separate contract. Plans are now being prepared.”

In 1953, I began a four-year career as a projectionist at the then named Varsity Theatre. Harry Canoy was the Chief Projectionist and Walt Porter, whom I believe was the son of the original owner, O. Porter, was the Manager, and our boss.

I well remember the big arc-lamp projectors, and how hot it got in that balcony booth, especially in the summer. That was also about the time that Cinemascope films were just beginning and I remember them putting in a new stage-wide screen and my having to change the big projector lenses to show those movies.

During a previous period, the theatre had been a performance theatre so it had a much deeper stage than most movie theatres and below the stage were numerous small dressing rooms, many of which had large posters on the walls which I now wish I had scavanged. I can still remember some great theatre staff parties on that stage after closing time.

During my tenure as projectionist we almost always ran double features and during that time I estimated later that I saw in excess of 2,500 different movies, not counting how many times I saw each one. My pay at that time was a princely $1.27/hour (with no benefits) except all the popcorn I wanted and all the (free) movies I could watch as long as it didn’t conflict with my work. After we had closed for the night, I can remember crawling out the small window onto the canopy over the entrance to change the marquee billing with movable letters and a long pole…..ah, those were the days.

Thank you for the info. By chance, do you have any old photos? Did the outside have that streamline neon signage?

Functions should also include: movies (classic) 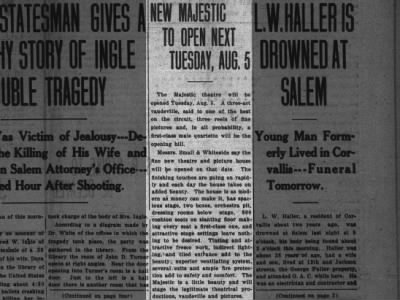 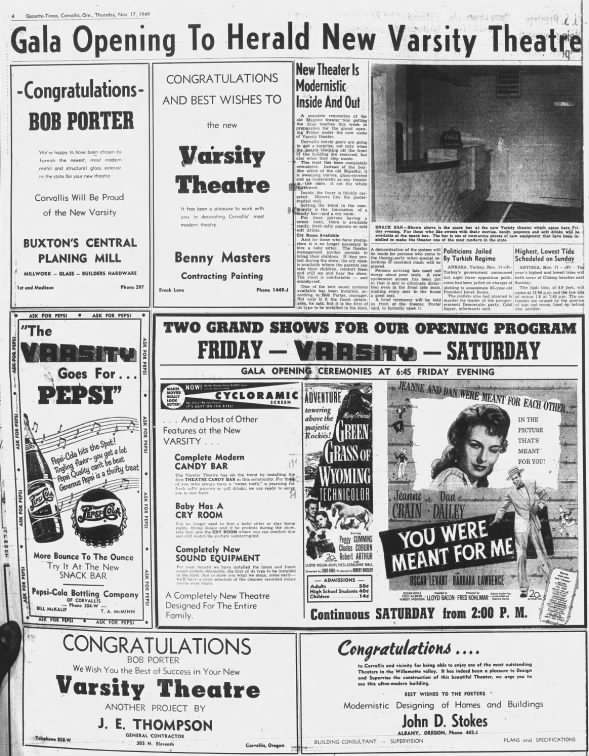