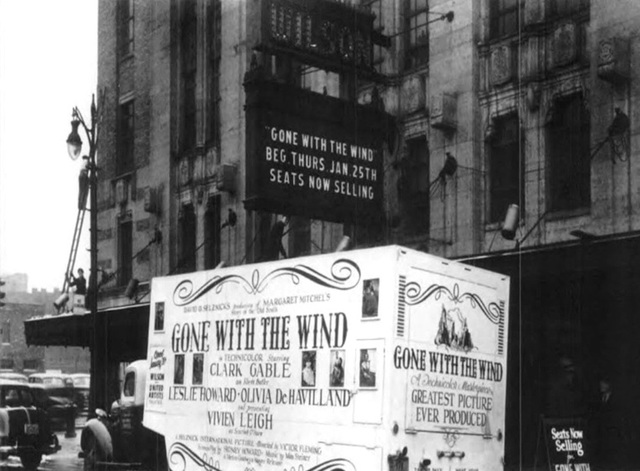 Though primarily a legitimate theatre, the Wilson Theatre did have then-cutting edge projection equipment installed before it opened, and did screen a film “These Thirty Years” on its opening night. In 1941, the Wilson Theatre was one of just fourteen theatres nation-wide to screen Disney’s “Fantasia” in Fantasound, an early use of stereo sound.

In 1945, the Wilson Theatre closed, and was purchased by the Detroit Symphony Orchestra. It was renamed the Music Hall.

In 1949, the orchestra vacated the theatre and it remained closed until 1953, when Mervyn Gaskin reopened it as a venue for Cinerama films. A 66 foot-wide screen was installed.

The Music Hall was only the second Cinerama theatre in the world, and supposedly the most successful as well, playing to packed houses for years. In 1964, 70mm equipment was installed for the premier of “It’s a Mad, Mad, Mad, Mad World”.

In Fall of 1966 it was closed for remodling to the plans of architectural firm Crane, Kiehler & Kellogg. The Music Hall reopened again, this time showing second-run films, until closing once more in 1970. In 1973, the Kresge Foundation purchased the Music Hall and renamed it the Music Hall Center for the Performing Arts. It received a $5 million renovation to return the interior to its 1928 appearance.

In 1977, it was named to the National Register of Historic Places. The Music Hall has continued to receive renovations over the years, and is today one of Detroit’s most magnificent venues to see concerts and other events.

The Cinerama screen at the Music Hall did not encompass an arc of 146 degrees. The 66-foot wide screen (measured along the arc (curve) would have had to measure about 18 feet deep at the center, measured from the chord of the arc (that is, a straight line from one side of the screen to the other) at the center of the screen.

The Cinerama installation in various venues had to accommodate the physical character of the theater itself. A screen at the Music Hall, in order to have the depth of 18 feet, would have required a major reduction in the number of seats on the main floor since the screen itself could not take up any space on the stage but had to be constructed entirely outside and below stage level.

Additional note: The screen in the Cinerama Dome in Hollywood measures 86 feet wide along the arc and covers about 122 degrees, giving the screen’s depth of curve about 21 feet. The Dome offers much more space in width and height than does the Music Hall, but it still does not accommodate a screen with 146 degrees of arc.

On March 23, 1953, The Detroit Music Hall became the 2nd theatre in the world to show movies in the revolutionary process know as Cinerama. The first film, THIS IS CINERAMA played here for 100 weeks and grossed $1,896,855. On Sunday April 12, 2015, you can revisit the world of the 1950’s when we present select sequences from THIS IS CINERAMA and the complete roadshow versions of CINERAMA HOLIDAY and SOUTH SEAS ADVENTURE, projected digitally on a specially constructed curved screen. Tickets for this one of a kind event are available at www.musichall.org.

I hope someone in attendance Sunday took photos, and will post them, of this installation. including screen and dci projector. Incidentally, while this was happening Sunday, demolishing teams were busily at work dismantling the auditorium of the Philadelphia Boyd, the 6th of the original US Cinerama installatiions.

Nice work, Cinerama. Do you happen to have any photos or advertisement art for the digital presentation of This Is Cinerama over one weekend last year at the Music Hall? Thanks

That was just a Blu-ray of This is Cinerama projected onto a screen.

Article about the Music Hall’s canopy being restored.

The October 5, 1966 issue of Motion Picture Exhibitor had this item about the remodeling project then underway at the Cinerama Music Hall:

“The Cinerama Music Hall Theatre will undergo a $75,000 remodeling project between the closing of ‘Khartoum’ Sept. 6 and the opening of ‘Is Paris Burning?’ Nov. 17. The street-level exterior will be resurfaced with Italian travertine stone with marbled blending of light brown and cream. The marquee will be restyled, new entrance doors of anodyzed aluminum are planned. Redecoration of the lounge and lobby will include new carpeting and drapes. Architects for the work are Crane, Kiehler, and Kellogg, a firm that has been involved in the building and redesigning of more than 900 theatres.”