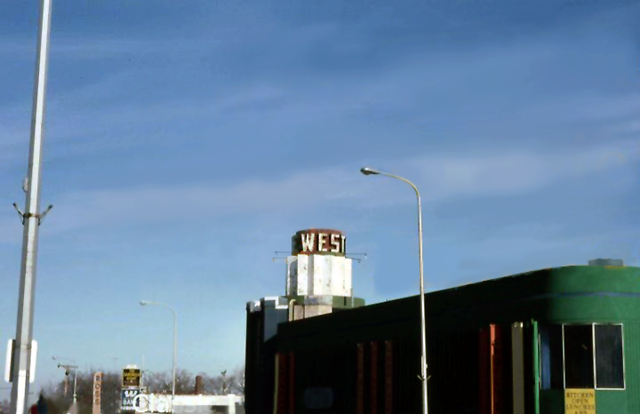 Built by W. R. Frank in 1939, the West Twins Theatre was a single screen movie theatre. It tried to ban smoking in the 1940’s, but it was a losing battle.

The highlight of its marquee was a revolving tower which dominated the West St. Paul district landscape for many years. The West Twins Theatre was closed in 1967 and went over to retail use.

Does anyone know if this theater started as the West Theatre and became the West Twins? And when the change occurred – if it did? And if this theater was called West Twins – logically it became a twin – did it and when? And if not why was it called “Twins”?

“That is just the top have of the theater. Back when I was a kid the marquee did not revolve, but it was called the West Twins Theater. Not that it had two screens, it didn’t. The owners were twins.” – Mark Clancy, former W. St. Paul resident

Only in development stage was this venue was called the West Theatre. Its opening name was the West Twins Theatre and not the West Theatre. The genesis of this name is from Wilfred Robert Frank and partner Oscar Woempner who had created the Rosebud Twins on the site of the former Royal Theatre in Minneapolis in 1924. They weren’t twin theaters but twin operations (the Rosebud was a combination of theatre and candy store/soda shop at opening).

The “twins” was an interesting concept well-placed in the Twin Cities. Frank and Woempner would operate the Boulevard, Franklin, Lyndale, Park, Rosebud turned Avalon and rebuilt Avalon, Chateau and Lasalle in Minneapolis among other theaters elsewhere.

The West Twins Theatre went out of business in 1967 with the entire facility up for sale in 1968 with the restaurant soldiering on. A request to the city for a license to reopen the theatre was denied unanimously in 1970. The space was used for other retail purposes