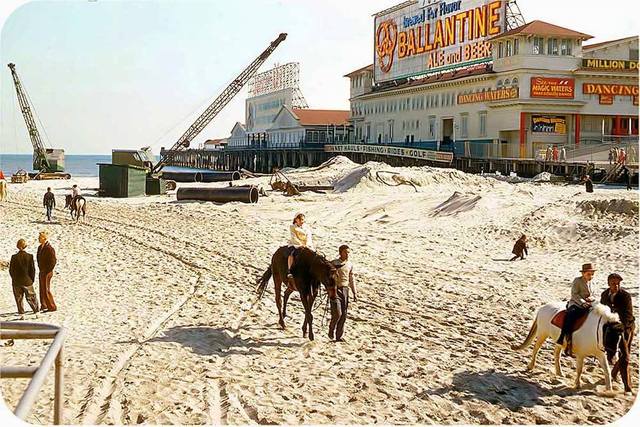 This early motion picture theatre was on Young’s Pier, which is now the Ocean One Mall (or maybe something else by now). It was the Million Dollar Pier for years. The theatre was probably demolished about the time they tore down Mr. Young’s elaborate house on the pier, address One Atlantic Ocean.

Ocean One has attracted visitors since 1906 when Captain John Young opened his famous Million Dollar Pier at this location. He even lived at the end of the pier in an elaborate marble villa with state of the art Edison-designed pastel lighting and garden sculptures.

I’m a member of the Three Stooges Fan Club in PA. The fan club headqarters is at the Stoogeum (www.stoogeum.com ). Gary Lassin, the FC President, is trying to document the Three Stooges live appearances. One in particular has been difficult. It is an appearance in, probably, late July, 1937, at the Million Dollar Pier in AC.

Any suggestions on verifying that appearance? It would have been Moe Howard, Larry Fine and Curly Howard.

Here’s a puzzling photo from Life Magazine, dated July 1941. I know George Hamid ran the Million Dollar pier, but I don’t recall that pier ever having a theater. The Steel Pier had two theaters, but this doesn’t look like any part of the Steel Pier. The other choice is a separate theater called Hamid’s, of which I don’t have any knowledge.
http://tinyurl.com/6lrvsa

Just added a 1951 photo courtesy of James Meier‎. Beach side of the Million Dollar Theatre. Sadly some of the the older photo links are dead.