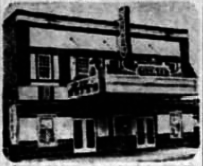 This was a Kerasotes theater in the early Sixties.

In 1948 the State was part of the Alger Theaters chain, headquartered in LaSalle. Owners were E.E. and H.R. Alger.

The State Theatre opened in a new building at the corner of Jefferson and Illinois Streets in 1912 as the Princess Theatre. The 1914-1915 edition of The American Motion Picture Directory lists it as the Palace Theatre. The builder and original operator, E. J. Degenhardt, had been one of the town’s barbers. He sold the business in 1924, but retained ownership of the building.

In 1926 the house was still listed in the FDY as the Palace Theatre, but by 1927 it had become the Strand Theatre. It was taken over and renamed the State by Alger Theatres by 1932, although last listed in the laggard FDY as the Strand in 1933. The July 2, 1932, issue of Motion Picture Herald said:

“ E. E. Alger of the State at Mendota, Ill., dug deep into his pockets to put that house in tip-top order with everything from projectors to ventilating equipment and seats.”