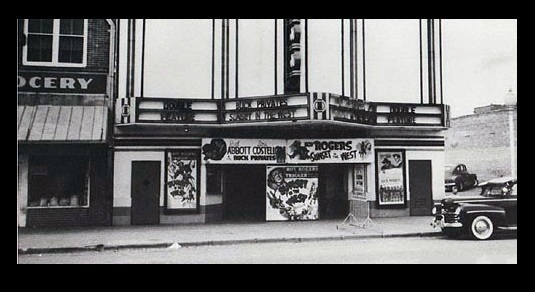 The Lynn Theater was opened in 1940 and was still in operation in 1951. It was located across the street from the Texan Theater. There is a jail now located on the site of the Lynn Theater.

This web page has a photo of the steel framework of the Lynn Theatre under construction, dated 1939. The text also notes that the house was designed by architect L. C. Kyburz.

Two more construction photos can be seen here, and here. The Lynn was built for East Texas Theatres, a subsidiary of the Jefferson Amusement Company, 50% of which was in turn owned by Paramount Pictures. L. C. Kyburz was for many years Jefferson’s in-house architect.

An oral history from long-time Lufkin resident Bettie Kennedy says that the Lynn Theatre was located in the 100 block of what is now called Frank Avenue, across the street from the older Texan Theatre. The Texan’s building is still standing, but the Lynn was demolished to make way for a jail.