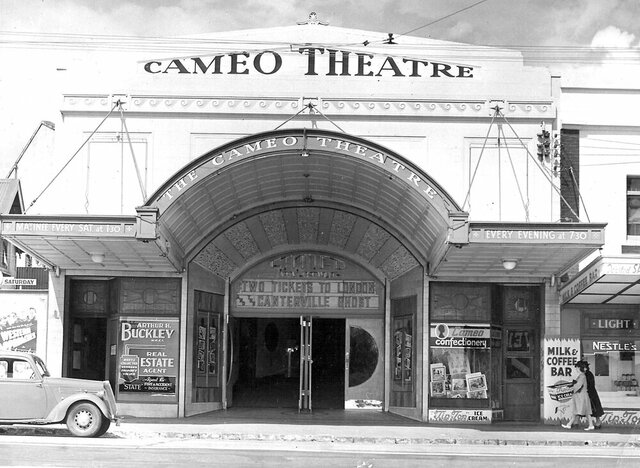 This stadium style neighbourhood theatre opened in 1928 as the Grey Lynn Cinema, and was located in the Grey Lynn district, west of Aukland city centre on the corner of Surrey Crescent and Great North Road.

It had been re-named Cameo Theatre by 1951 and was run by the Kerridge-Odeon chain. Last known as the Valhalla Cinema, by 1973 it had closed as a cinema and boxing & wrestling matches were staged. Today it operates as a video shop.

The interior has been stripped bare and very little of the once lavish interior remains. The proscenium and interior ceiling was made up of three curcuits of coloured lights and was once in its heyday quiet beautiful to see. The heavy red velour curtain was alway hand wound from the projection room right up to the day the cinema closed.

The auditorium ran as a "T" shape to the foyer which was ramped. Entry into the auditorium arrived at the cross over aisle, turning left to the circle and right to the stalls. The managers office was entered through the auditorium at the door to the right of the stage. Top masking dropped for Cinemascope and was hand controlled via the back stage area only.

This was my first projection room I ever entered and spent many fond memories learning the trade of a projectionist. Things were pretty primative. Change overs were performed with a broom stick on the front wall and attached were two pieces of carboard which would block one port hole at a time. 78rpm records were still played and fading out the sound after each record. The projectors leaked buckets of oil, yet it was a great place for an enthusiastic boy of 13/14 to be.

Originally known as Grey Lynn Cinema when opened in 1928; re-named Cameo pre-1948; closing as the Valhalla in 1977. Seating capacity was 984

I used to go up in the projection box in 1969. I remember the broomstick changeover and the old 78s. I think they belonged to the senior projectionist, a guy called Hilton. I also had the hand wound curtain drum and hand moved screen masking for w/s cinemascope.